Digimon Racing is a typical Game Boy Advance racing game, except for its Digivolve feature. 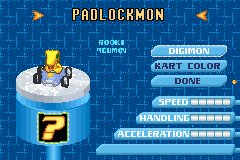 By changing the value at 0300547C in the European ROM to 0B to highlight the next character after the last selectable character while in the character select screen, it will still show "Secret Racer". However, if you have the code on before you go to the character select, it will instead show the name "Padlockmon". Although the game always uses Agumon's voice regardless of the previous Digimon selected, it is possible to see (and play as) the hidden Digimon by exiting the "Padlockmon" screen and re-entering with the code kept on at all times.

This is blatantly a small joke at the fact that the Secret Racers have their pictures replaced with padlocks before you unlock them.

The Japanese logo features a checkered flag, a racing tyre and some confetti behind the Digimon logo. The international release decided to go with a rather bland "Racing" text underneath the Digimon Frontier logo. The European version also lacks the "Wireless Multiplayer" option.