Digimon World DS is the first Digimon game on the DS. If there's one thing to be said about this game, it has really, really sweet graphics for the Digimon.

Even in the English games, there's a leftover from a Japanese demo. The Japanese text predictably says "Excepted for release on June 15th! Look forward to it!" 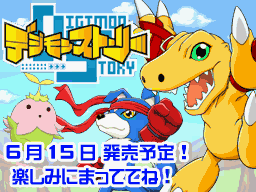 At the end of the Digimon sprites is a black and white Greymon sprite with "temporary" crudely written on the stomach that is repeated a few times.

If hacked into your party, SkullGreymon can be dropped off at the DigiFarm. He also possesses a 'happy' sprite, despite being an unobtainable boss Digimon.

By changing the value at 145552A70, it is possible to hack Tortomon (83), Devitamamon (293), Ebemon (298), ShineGreymon (ShnGremon) (299) and MirageGaogamon (MgGaogamon) (300) into your party by using DigiConvert. These Digimon usually go completely unused in this game. They are Level 0 and display a broken image of Minotarumon on their profile and have no walking sprites. It is possible to use them in the game for a while, but it causes gameplay to slow down to a crawl and eventually crash. The Digimon do make an appearance in the sequels, Digimon World Dusk and Dawn.

In addition to this, the NPC Digimon can also be converted and have their information filled out as necessary. Much like the aforementioned Digimon, they display a broken image of Minotarumon but most possess walking sprites and thus do not cause the game to crash. However, they lack any battle moves.

Kenkimon, Flamedramon, Kongoumon, MetalGreymon and Imperialdramon Fighter Mode are duplicated in the Digi-Convert list, but cannot be seen through normal means. Most have identical stats, though the Imperialdramon found at the end of the list (ID 317) has different stats.