Disgaea: Hour of Darkness is the first, and possibly only, PS2 game to feature a Horse Wiener as an equippable item.

There is a debug mode! You can use it! Yes. Here is the Codebreaker... codes.

(Must be on to use Codebreaker on Disgaea)

Alternatively, if you're one of them fancy city folks with their Emulators and their ISOs and their Junk Food and Rock 'n' Roll... you can just use this PCSX2 patch. You'll want to skip the BIOS startup by clicking "Run CD/DVD" instead of "Execute". 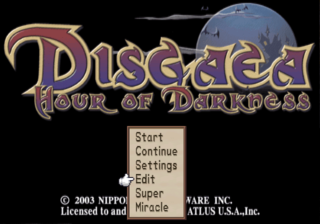 Once the game boots, you'll notice a few new and interesting options on the title menu...

Super and Miracle can start you out with some normally inaccessible characters like Prinny Kurtis. 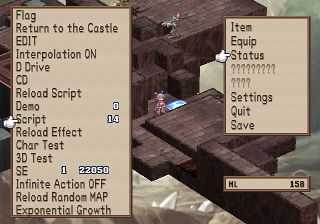 I HAVE THE POWER. 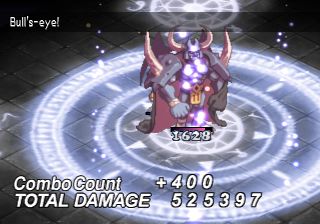 Infinite Action mode is about as balanced as you'd expect.

Once you've somehow made it into the game without breaking your hand from sheer excitement, press Select on Controller 2 to bring up the in-game debug menu! 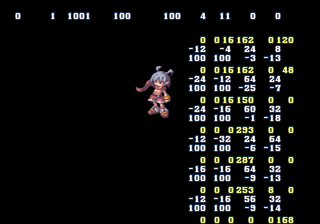 Not exactly intimidating, no?

In this mode, you can view the character sprites at your leisure.

On Controller 1, R1 / R2' cycles through that section/characters sprites & animations, L1 / L2 cycles through each Character/Section, X repeats the animation, Square + D-Pad moves the sprite, and X + D-Pad resizes it. Start swaps between two sets of images, one having the characters, effects, and summons while the other has whatever temporary graphics are loaded. There doesn't seem to be any button combination to swap palettes manually, which makes it possible to only view one version of each character despite some, like the Prinny class, having a variety of unlockable colors.

Along the top are numbers that indicate what image data is being used and some other handy info. The Palette Row Count (16 colors each) seems to overlap another number sometimes; the overlapped number's purpose is unknown, but can fluctuate during animation.

The numbers displayed on the right correspond to image data used to display the graphics. Each set represents one rendered image.

Blend Mode/Layer is a bad description: It seems to be that anything on 2 has a Linear Dodge blend mode, anything on 1 has a kind of Linear Burn. Numbers like 8, 16, or 24 might indicate an attachment point or orientation for weapon or other external sprites. This needs more testing to confirm or deny. 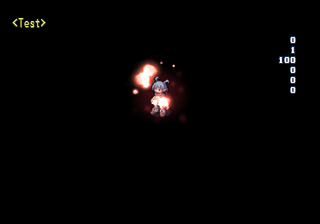 Poor Laharl is subjected to all the effects.

In this mode, you can see all the visual effects.

To enable it you must hit Select on Controller 1, it will bring up the <Test> text and some numbers on the right. All the button presses need to be from Controller 1. The Left Stick moves Laharl around, L1 and R1 rotate the camera, L2 and R2 changes which effect and sound will play (as shown in the numbers), X plays the visual effect, and Square plays the accompanying sound effect or whatever sound effect is in the slot number.

The first two numbers displayed on the right correspond (most likely) to the effect and sound data. The next number is the speed at which the effect plays, this can be controlled by holding Down+X and pressing Left or Right. You can even go into the negatives and the effect will play in reverse. Be careful when changing the speed because by holding down the X button you will be constantly creating effects and you can potentially lag the game or crash it. The next three numbers correspond to roll, yaw, and pitch respectively. Holding down the Square button and pressing Up or Down will change the roll, Square and Left or Right affects the yaw, and finally Square and Triangle or Circle changes the pitch. 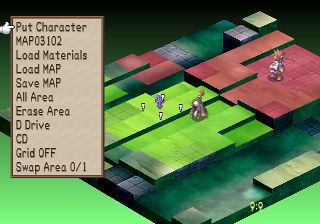 It ain't BUILD.EXE but it'll do in a pinch.

There is some map data left in the game that went unused.

There are five maps, three unique ones, that are never used by the game and look like they were used for testing purposes. Using a cheat device or editing a save file will allow the player to access these maps through the warper NPC.

Even though they are not used by the game, they will appear under a new "Extra" category in the warper's menu.

If you wait long enough at the main menu the game will eventually launch a demo mode where characters battle automatically. While these levels aren't technically unused, they are normally unplayable. As with the Extra Maps, by editing a save file or using a cheat device they can be accessed and act as normal levels with the autoplay code treated as story. Launching the map from the warper NPC allows you to "Skip Story" and play the level yourself. If you do not skip the story, the game will lock out the controls and key presses will be issued automatically. Since your party isn't likely to be a match to the characters used by the demo sequence, the key presses will almost certainly end up issuing the wrong commands or getting stuck in menus. When all of the key presses have been issued, control will be given back to the player and the map will play normally.

These maps, when added to the warper's menu, are under the category "Puzzle":

Where the ending scene takes place. This map even has a name in dungeon.dat! 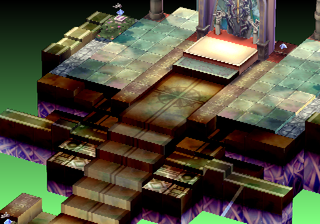 mp01304: Not unused but normally unplayable.

There is no data left for these maps except for textures for the Rank 12 Exam but they are identical to the previous map textures and are meant for the Local forum (Dark Assembly) map. The entries for these maps still exist in the dungeon.dat file. Each map has a name of the form: Exam for Rank #

It is probable that the developers didn't know how many ranks there were going to be and just made 19 entries to have a buffer. The maps would have been from mp21013 to mp21020.

There is one lone texture file for map mp03030 which has textures used by the Human World maps. The strange thing is that it is nowhere near mp01001 to mp01003 where the Human World maps are. Instead it is sandwiched between the last Cave of Ordeal map (mp03005) and the first of the unused Extra maps (mp03101).

There are also 49 texture-only files peppered between mp20101 and mp20299. Unknown purpose.

The Japanese release features an unused image called TitleMj0.tx2 next to the title screen images. It is unknown what the purpose of this image is, but it might have been part of a placeholder title screen since it features the title "Makai" (roughly Netherworld) along with the subtitle "Little Prince of the Darkness". 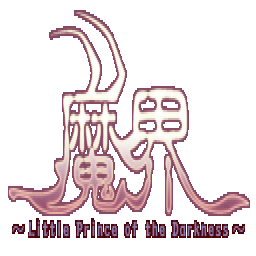 Many screenshots were left on the disc, some of which show testing scenes, others are just filler for unused locations.

Some cutscene placeholder sprites are also present. It is possible in some cases to infer the intended character and pose from the label or filename (the first two digits give the character, the second two the pose for a given character).

This image is a compilation of the more interesting "NODATA" or placeholder images found in the character spritesheets.

Baal has full color palettes for multiple colors, probably because he was originally intended to be a fully unlockable class. He also has face icons for each color.

The Invasion From Within

One With The Stars