Disney's other attempt at getting in on the skateboarding craze of the early 2000's.

There is a text file called levels.txt inside the game's data, which controls the level order.

The first 14 levels can be found in the game, but three of the levels, bonus_01.lvl, slypark.lvl, and critterroom.lvl never made it to the final version. However, bonus_01.lvl can still be found within the data files, complete with spawn and coin coordinates. Unlike most levels, it does not have its own objectives nor does it have .ase (model) or .mad (material) files. 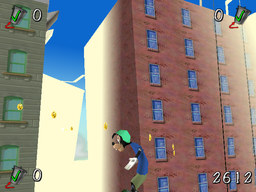 All objectives are set to 0 (trashcans) and no music is set. It only consists of coins and a spawn point.

According to the file bonus_01.lvl, its level name is "downtown" and it is looking for a nonexistent model called "bonus_1.ase" along with material file "bonus_1.mad". The level name could indicate that this level was supposed to be a bonus alternative of the City course "Downtown". However, when using Downtown's model within the level, the coin formation won't fit the level at all and are floating unreachable in the air.

By changing the level file to load an existing model file and replace one of the used levels in levels.txt with "bonus_01.lvl", the level can be loaded in the game.

However, Goofy/Max will be stuck in the ground. The only known way to fix this, is to change the "g_gravity" value in the "config.cfg" file inside data/config to -0.1000.

funfair.bmp is a white box with "FUNFAIR" written in plain red text.

lvl11_invis.tga is a pink texture with unintelligible writing. Since it's meant to be invisible, obviously you never see it.

mountain_env.bmp is an unused sky graphic meant for the riverbend level.

park.tga is an unused backdrop meant for the funfair level. It appears to be a photo of a real roller coaster.

sky_1.tga is an old sky graphic once used in an early version, but can still be found in the files in the preview and final versions. In fact, it is still used for night_env.ASE, the sky for the Soul Session level, albeit heavily shaded.

Whenever Goofy or Max make a faulty board trick, this sound would be heard, but cement_land.wav plays instead. It can still be found in the game's data files.

To compensate for the title changes, the Disney logo was moved all over the place. The "Skateboarding" part of the logo was also increased to fit other languages' translations in there.

There is one trick that for whatever reason didn't make it to Trick Tutor, but can still be performed in-game. However, it requires a much higher elevation (e.g., water spouts from fire hydrants) and gives the player 5,000 points if done correctly. The hidden trick is known as 720 and can be performed with the V + B + Down keys (3 + 4 + 🠟on gamepad) while in the air.

By pressing the F10 button, a screenshot will be saved in TGA format in the game's "data" folder.

Entering a level with no set spawn trigger will spawn Goofy/Max at coordinate 0:0:0 and displays "Spawn trigger not found" at the top left corner of the screen. 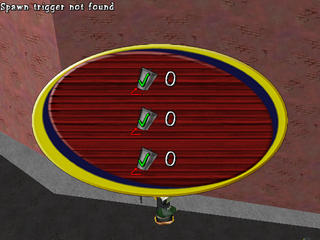 Here's an example, when trying to load bonus_01.lvl:

The maps include their build date on the second line, it also seems like the maps were made in 3dsmax, most likely 3dsmax 5. The example listed here is Beach.