Disney's Lilo & Stitch: Trouble in Paradise combines a certain Disney film, Crash Bandicoot and voodoo. Oddly, Sony Computer Entertainment removed the Trouble in Paradise subtitle in North America, despite the Windows port maintaining the original name in all regions and the presence of a completely different GBA game that also lacks a subtitle.

A hidden level select is present in the main menu. It can be accessed by memory editing the following addresses to a value of 5 (4 bytes):

Although it is labelled differently in the European version, the menu itself is identical.

P 17 Demo loads the "Koa Wood" level, but with Stitch as the playable character instead of Lilo. The pickups are changed to Stitch's coffee cups accordingly, and there are different enemies. The level also does not have any collectible photos. 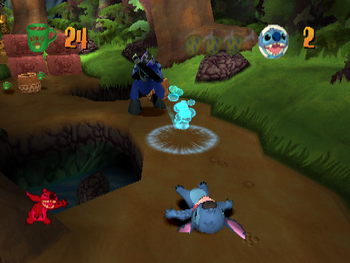 Text with the name "test":

Text referencing an unused clearing stage titled "CLEARING_F" and identical text for a path stage titled "PATH_6". All text in the game is also included in several languages, resulting in "Null" appearing multiple times here with a note in the middle:

Placeholder text for the dialogue subtitles:

Leftover text from the Windows version:

Stored in the game's ELF file:

Among the unlockable videos in the North American version are three "Inter-STITCH-al" teaser trailers for Lilo & Stitch where Stitch cameos in other Disney films, namely Aladdin, The Little Mermaid and The Lion King. In the European version, the Aladdin trailer is present but the other two are missing, with a Beauty and the Beast crossover trailer instead taking their place. None of the trailers missing in the respective releases are present in the game's files.

A similar situation occurred in Disney's Stitch: Experiment 626, where some of the trailers were missing in the European version.