Disney's Stitch: Experiment 626 is a prequel to the Lilo & Stitch film, released just a couple days before the film came out in theaters. It features intergalactic mass destruction and one of the first appearances of a genetic experiment other than Stitch. It later got retconned from the franchise's canon by the 2005 direct-to-video film Lilo & Stitch 2: Stitch Has a Glitch.

GTHMAD.IPU is a cinematic of Gantu talking, intended to be used for an intercom.

disney.pss is a short clip of Stitch hopping with the text "STITCH CINEMA PLAYER!!!" moving about in the background. The file is located in the same folder as the gameplay demos and company logo FMVs. It is likely to be a placeholder although it may have been intended to be used when the player viewed the "Secrets" menu.

LS026.pss is only present in the European release and is a scene from Lilo & Stitch which is not included in the "Secrets" menu. The scene is when Stitch drives a gasoline truck into a volcano and launches onto Gantu's ship. It is the last video in the game's files but other scenes present in the game take place at a later point in the film. Notably, this video is both present and used with the same file name in Disney's Lilo & Stitch: Trouble in Paradise.

SHAD.TGA is a less detailed texture for the Buzzer enemy.

OAJUMA.BMP is a texture with two lit arrows for the jump-pad used in the first boss battle.

621_A.BMP is a texture for the mutated Experiment 621, though it is mostly the same as the used texture.

Three textures for the "Meet the 700s" level.

Two particle textures in the files of the "Got Gas?" and "Energy Lines" levels.

Screenshots from Lilo & Stitch located in a folder titled SECRETS. These would have been viewable as a gallery in the "Secrets" menu and were used in the March 28 prototype. Although many of these stills are seen in loading screens and in the title screen, the image files used are different and also have different sizes and resolutions.

ARROW.AGG is an untextured model of an arrow.

The game's file used for mapping buttons (GAME.SCM) includes a number of debug functions which can be activated by swapping one of the used mappings with a debug one. The available debug functions are:

The game's ELF file contains a script titled Stitch.ini used for activating minor debug functions which allow the game to skip to the level select screen from startup.

UI.AIS contains a list of levels from LVL0 to LVL45. LVL0 to LVL17 lists all the game's used levels chronologically using their internal filenames. The remainder refer to test levels which are not present in the files and unused levels. Like the in-game text, the list is stored as hexadecimal values, for example UNUSED is stored as 0x55 0x4E 0x55 0x53 0x45 0x44 0x00.

GENERAL.SCM is a similar file to GAME.SCM that lists various debug functions. They may have been removed.

Hidden behind some of the walls of "Energy Lines" (just before the tall room where the player has to jump down a long pit) are two hockey pucks. One contains a texture for the Disney Interactive logo (DIPKLOGO.BMP), the other contains the High Voltage Software logo (BHPCKLGO.BMP) and both have the words "Made in Canada" (TEXTURE.BMP) written on the side. They can be picked up from their secret location and will slide across the room when thrown, instantly killing or destroying anything in their path, including Stitch. The pucks were added by developer Mike Henry as a reference to a cancelled hockey game that High Voltage Software had worked on, with Disney only allowing their inclusion if one was textured with their logo. [1]

In the below screenshot the pucks are visible behind the walls as a result of an emulation bug.

Underneath the starting area of "Rotten Eggs" is a sphere which uses the texture for the stage's lights and moves backwards and forwards.

"Caverns & Chasms" level has a number of misplaced objects, specifically:

"The Aviary" has a river of acid underneath the room entered after completing the jetpack hallway. 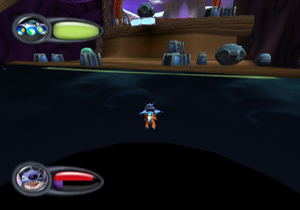 In "Stitch in Space", a line of animated lights is present in the area between the forked pathways.

The North American "Secrets" menu includes the four "Inter-STITCH-al" teaser trailers for Lilo & Stitch where Stitch crosses over with other Disney films, namely the "big four" Disney Renaissance films Beauty and the Beast, Aladdin, The Little Mermaid, and The Lion King. The Lion King and Little Mermaid trailers were removed from the European release, but they are still present in the game's files.

This also means that these two strings are unused in the European version, even though they are still in the file used for storing the Secrets menu text (SECRETS.AIS):

A similar situation occurred in Disney's Lilo & Stitch: Trouble in Paradise, where some of the available trailers differed between the American and European releases.

Much of the text relating to memory cards also differs in the European version:

The European version also has an extra error message for when the card is unable to format:

There is also a string of text relating to the game controller which is different:

The Japanese version has a more plain looking title screen.