Doctor Who: The Runaway

Doctor Whoː The Runaway is a VR game that takes you on a short adventure with the Doctor. Unfortunately, it came too late to let us experience the glory of the Series 8/9/10 TARDIS interior, but we'll settle for the Series 11 one. Maybe.

The folder Mocap-Rough contains an early version of the Doctor's model. It has fewer polygons and slightly less cartoonish proportions than the final model. The arms are also in a different resting position, and the earrings are noticeably different. The model does not have its own textures, but the majority of the UV mapping corresponds to the final model - with the exception of the head, which is clearly designed for an earlier texture. 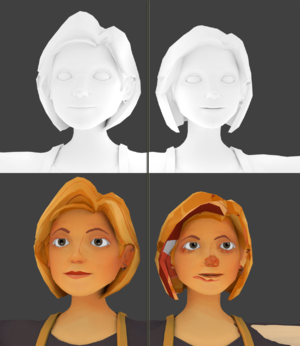