Pro Action Replay code 7E00D300 will load an incomplete version of Web Woods upon entering any level. This version contains several differences from the final one:

However, using PAR code 7E0E1000 for Moonjump (jump at any point and as many times as you want) will enable you to get to the other side of the barrier. There are no other objects in the level, but you can also jump over the cave at what is normally the end of the level...to a bunch of random tiles between there and the rightmost border of the level. (A video can be seen right here.) 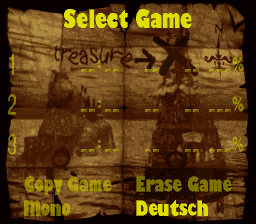 PAR code 7E061702 enables an option to change the English game text to German...except this doesn't actually work, mainly because the only other language used for the text is French. There's no German text in the European or Japanese versions, either.

Still, there was a German release which, as you may have guessed, uses German text. It also has English as the alternate language option.

A slightly different version of the background used on the screen where Cranky ranks you based on the number of Hero Coins collected is stored in the ROM. Compared to the final version:

Diddy and Dixie looking rather sad. Judging from their close proximity in the ROM to the victory sprites, these were likely intended to be used for failing a Bonus Area or an alternate animation for the ending of Stronghold Showdown after a tied up Donkey Kong gets taken away. Similar animations were used in Donkey Kong Country when failing the various spelling, shell game, mix-and-match bonus games and missing a chargeable platform in Tanked Up Trouble while being stranded.

Directly after the red and yellow Zinger palettes is this one. Green Zingers were used in the first Donkey Kong Country, but not here.

Aside from the blue and green varieties, Flotsam also has red and yellow palettes.

Flitter has four unused palettes, but only uses the blue-with-purple-wings variant in-game.

These tracks are loaded as part of the Crocodile Cacophony music set used in K. Rool Duel and Krocodile Kore. However, a few checks for this set in the code result in them never being played normally.

PAR code B883B52C will allow the death music to be played normally in both K. Rool battles, and B8B3090A will allow the victory themes to play in K. Rool Duel. B8B31300 will do the same as the latter for Krocodile Kore, but it will give you a Kremkoin instead of a Hero Coin for beating the battle the first time.

Unknown, but it may have been intended for when a Kong is released from a DK Barrel like in the previous entry.

This sound should be used when the Kongs are transforming inside an Animal Buddy Barrel. It is even called in the game's code, albeit too late, and on the same channel as the sound of the barrel breaking. Thus, it cannot be heard. It can sometimes be heard when performing the Castle Crush glitch.

The game contains a much more thorough set of anti-piracy tests than those seen in earlier SNES titles. Similar programming is also present in the next game and Killer Instinct.

Failing any of the below tests (except the Checksum Verification and Reset Vector Verification) will display the above unauthorized device message on bootup. The international versions fittingly use the background from the Game Over screen with Diddy and Dixie in jail, with the message displayed in the game's regular 8x8 font. The Japanese version instead features a much more plain looking screen, similar to ones seen in other first-party SNES titles, though it does feature a unique font.

Behind the scenes, the string A thief! is copied to both $0907 and the beginning of SRAM (battery-backed memory used to hold the save game data).

Ten seconds powered off is necessary for the contents of RAM to decay. If these tests fail again on the second boot (using the string saved in SRAM to determine if it's the second try), then the anti-piracy message is shown. However, if the tests pass, the string Rareware is copied to $0907 instead; if this string is detected at startup, the anti-piracy checks are skipped and the game boots normally.

At the beginning of a level, a checksum is run on 544 bytes worth of code and data which includes all of the above tests, the PAL/NTSC region check, and various initialization routines. If the checksum generated doesn't match the hardcoded value it compares against (i.e., the anti-piracy routines were tampered with), RAM address $7E0AFD, which holds the total number of screens in the level, is decremented by one. This punishes the player by causing the screen to stop scrolling just before reaching the goal in a level.

There are two separate checks which punish the player if it detects that the Reset Vector (boot address) was modified (usually meaning the presence of a cracktro).

The colors of the buttons on the controllers in the game mode selection screen are region-appropriate. North American SNES controllers have purple and lavender buttons, while the European and Japanese controllers use red, blue, green, and yellow buttons. However, the controller in the "Cheat Mode" option retains the latter set of colors in the American version, which was probably an oversight.

The aforementioned controller change appears in the Monkey Museum. An additional shadow can be seen on the controller in the Japanese and European versions as well.

In the Japanese and European versions, some background details of K. Rool Duel are different - most notably, the door appears to have a large hole blown through it. For unclear reasons, this was changed in the American version so that it simply has a (rather ill-fitting) window instead. The controller's buttons were also recolored, although whoever did the touch-ups for the North American version accidentally drew the A and B buttons too low.

The game audio is, by default, in mono in the US and European versions and in stereo in the Japanese version.

In the Japanese version, saving at the same Kong Kollege again costs one Banana Coin instead of two. This change does not carry over to Donkey Kong Land 2. 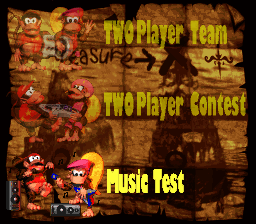 In the SNES version, select an empty file, then press Down, Down, Down, Down, Down when Two-Player Contest is highlighted. The menu will scroll down to the new option, where you can press Left or Right to select the music.

In the GBA version, enter ONETIME in the Cheat menu inside the Option screen to access the Music Test.

Changes between Rev 0 and Rev 1

The Virtual Console version makes a change to Glimmer's Galleon: In the SNES version, when the Kongs would change direction, Glimmer would turn around to face the screen; during this time, there would be a blinding flash where the entire screen would turn white for one frame. The Virtual Console version removes the flash, reducing the risk of epilepsy.