Kracka, the red version of Knocka in a TNT barrel exclusive to the GBA version, was actually created for the original game. All of his sprites are present, along with an alternate red palette for the normal TNT barrel sprites which would have been used if he was picked up and thrown.

There is also a purple palette for the normal barrel sprites, which suggests that Kuchuka could be picked up and thrown at one point. In the final version, Kuchuka cannot be carried or defeated by any means.

Unused sprites of Kopter taking off, standing idle, and being defeated. The defeated sprite was later used in Donkey Kong Land III. In Donkey Kong Country 3, Kopters are always flying and there is no way to defeat them.

A sprite which is meant to overlap the entrance to Arich's Ambush in the Kremwood Forest map. In the final version, the entrance is always dark.

Squawks' "hurt" sprite from Donkey Kong Country 2 is present here as well, although the sprite that replaced it isn't actually new: in any DKC2 level with Squawks or Quawks, grabbing onto the bird or being hurt by enemies causes the bird to briefly display this animation frame. The sprite was restored in the GBA version.

An unused version of Baron K. Roolenstein being electrocuted exists in his set of compressed sprites (the final sprite is in the standard uncompressed set of sprites). This early sprite has straighter, stick-like fingers.

The level order appears to have been shuffled late in development, as the internal ID order does not match the final game's progression.

The most notable changes are:

Present at 0x3779E9 in the ROM in all versions is most of Klubba's dialogue from Donkey Kong Country 2.

In Swanky's Sideshow, the barrel that Swanky Kong stands in has bananas sitting on the top of it. While Swanky's sprite mostly covers up this detail in-game, the corner of the bunch can still be seen over his left shoulder. 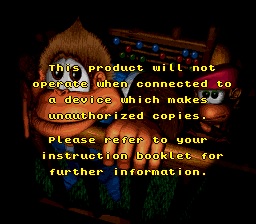 Many of the same anti-piracy routines seen in the previous game (and also in Killer Instinct) are present. However, there's no evidence currently that the Checksum Verification and Reset Vector Verification routines exist in Donkey Kong Country 3.

Failing any of the below tests will display the above unauthorized device message on bootup. 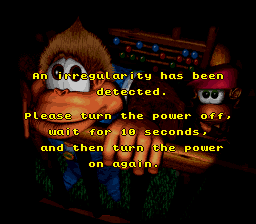 Ten seconds powered off is necessary for the contents of RAM to decay. If these tests fail again on the second boot (using the string saved in SRAM to determine if it's the second try), then the anti-piracy message is shown. However, if the tests pass, the hex string 0xF49272EE77A6E78A (translates to ASCII ⌠Ærεwªτè using the CP437 character set, appears to be a stylised "Rareware") is copied to $06A3 instead; if this string is detected at startup, the anti-piracy checks are skipped and the game boots normally.

A few minor bugs and issues that were present in the American version were fixed in the Japanese and European releases:

Strangely, the US version of Rocket Rush does not have the "G" included among the collectable "KONG" letters. This was fixed in all other versions, including the re-release on the Game Boy Advance.