The first console Doom port to hit shelves, this version is generally considered to be horribly rushed (the music makes that obvious), containing only 17 levels from the first two episodes of the PC release. Some of its source code is available in the Jaguar source. 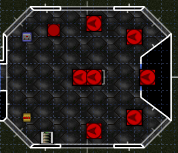 It's impossible to get 100% kills on Ultra-Violence difficulty in Level 2 because there's an imp placed in the void behind the exit switch. In the PC version of this level, there was a small lift where the exit switch is in this port, with this imp and the exit switch in an alcove it lowered into. The imp was never removed when the area was simplified.

Several sections of Level 10, originally E2M2: Containment Area, were removed when the level was simplified for this port. One section was accidentally left in, however – it's highlighted in red in the image here. These three rooms were originally connected to a hallway with crushers near the red door. The sector defining the largest room is set as a secret type, so it is impossible to get 100% secrets in this level. There's also a chainsaw, two 4 shotgun shell pickups, an imp, two demons and nine lost souls orphaned in it, so getting 100% kills isn't possible either.

Internally, the game's levels go from MAP01 to MAP15, then to MAP23 and MAP24. The seven missing levels were featured in the Jaguar port, which was developed side-by-side with this one. The unused levels will all load in this version of the game if they're restored (with the exception of Level 20). A patch to restore the missing levels is available here.

These projectile and impact sprites are also present in PC versions prior to v1.666. They're just as unused in this port.

The flaming barrel from Doom II is present in the IWAD, but never used.

Tall tech columns were removed from every Knee-Deep level, but their graphics remain in the ROM.

This small grey stalagmite is not featured in any levels, either. This even lacks an editor thing number, which is always applied to any object in the game.

A texture taken from Doom II. In this version, it has a mysterious internal name: CBLUE01.

Apparently crushers, which are present in the original DOS version, are still fully functional but unused due to the geometry being based off the Jaguar port, which does not feature any crushers. Whether or not they were scrapped due to performance issues is still a mystery, although it's possible that due to using the Jaguar version of the maps there wasn't enough time left to add crushers back. 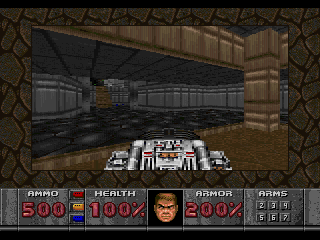 Despite being fully implemented into the game and being described in the manual, the BFG9000 weapon simply isn't placed in any of the game's levels. It can be accessed by using the All Items cheat (Up + Mode + A + C simultaneously while paused), and quick-selected by pressing Mode + Z. 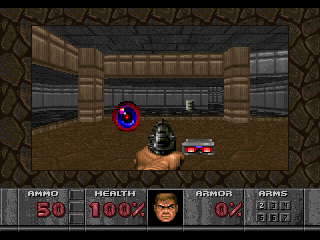 Both the blur artifact (partial invisibility) and light amplification visor can be placed in a level, but neither actually have any effect when collected. 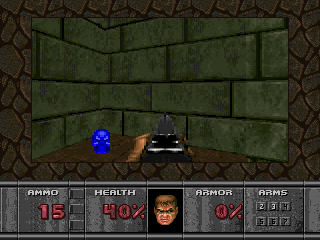 Skull keys are fully functional, but the status bar isn't set up to display them. This can easily be seen by using the patch linked above to restore the missing levels.

This port does not use the on-screen displays when picking up items, yet they are present in the ROM, starting at 3C468 and 3C8B8, respectively.

If you extract the WAD from the ROM and open any of the maps with a map editor, they all contain spawn points for Co-op and Deathmatch players, as well as things with the 'Multiplayer Only' flag set, but this port features no multiplayer capabilities, so these things are never seen in maps.