This is a sub-page of Doom II: Hell on Earth (PC).

In addition to these, there is also a bootleg copy of 1.666 which was leaked prior to the official release of the game, which the upgrade patches are not compatible with, but has no known differences with the official 1.666 release. The 1.3 through 1.6 beta versions of Doom also have partial Doom II support, as the game was in development when those betas were published.

For whatever reason, the entire map was shifted southwest, closer to the 0, 0 coordinate, in version 1.8. As a result of this, some flats became unaligned. The map was shifted again in version 1.9 to fix the flat alignment. Things were also shifted, but not by the same amounts, meaning they have slightly different positions in relation to the map geometry in each version.

In v1.666, there was a door made of silver bars which blocked the alcove with the switch that opens the western half of the map, similar to the red key bars that remain in the opposite alcove. These were removed in v1.7 and a monster blocking line was put in their place to keep the shotgun guy contained. 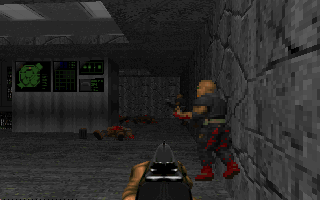 Like Level 1, the entire map was shifted southwest to be closer to the 0, 0 coordinate in v1.8. And once again, some flats became unaligned, the most obvious being the secret teleporter. This was fixed in 1.9.

Things were shifted too, with hilarious results as several enemies ended up stuck in the walls. These were also mostly corrected for v1.9, with the exception of a single shotgun guy and a barrel who are still stuck in a wall near the blue key. 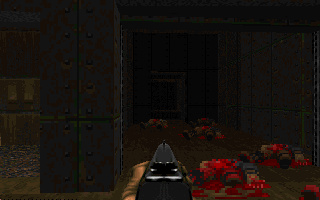 A new secret area was added to the room with the blue armor and shotgun in v1.9. It contains a teleporter to a small room with a backpack and door to the central area.

In v1.9, the lift near the start that drops the player into the dark tunnel can be activated from inside the tunnel.

Entering the area to the right of the lift that drops you into the tunnel closes the door behind you. It can be reopened with a switch in the alcove closest to the door. Originally, entering the room with the mega-armor would also close this door. Since the door switch is one-time use, this was basically a trap and the player would be forced to leave this area through a tougher section of the map. This was changed in 1.9 so that entering the mega-armor room doesn't close the door.

The 2019 re-release of the game removed the linedef actions from the door track of the red key door, which could crash the game if interacted with. 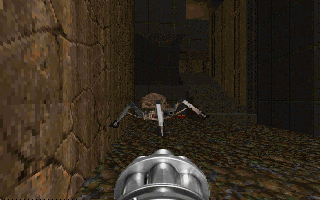 A hard difficulty Arachnotron was originally stuck in a wall in the outside section right before the first arch-vile of the game. It was finally freed in v1.9.

The ceiling in the crusher room with the rocket launcher has been raised by 32 units in v1.7. This reveals a missing upper texture.

Near the center of the map there is a set of door and lift bars which open as the player runs towards them. In v1.666, the trigger lines for these were closer together than in 1.7.

A single zombieman located to the northeast of the central tower was removed from this map in v1.7. 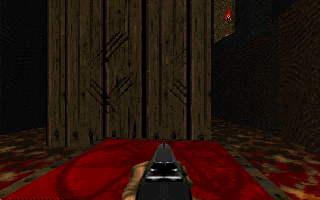 The teleporter in the lava pit with the caged arch-vile originally did nothing in single player and teleported the player to the dark cave area near the yellow skull in multiplayer. In v1.7, the teleporter was changed to teleport to the central pillar with the supercharge instead.

There was an entire linedef missing from one of the metal boxes near the yellow skull in v1.666, which was fixed in 1.7.

The back side of the lift which lowers to reveal the teleporter out of the red skull room was originally untextured. This was fixed in 1.7.

The blood pillar with a revenant on top could only be lowered from the side closest to the lift in v1.666. V1.7 made it so it could be activated from all sides.

The lift near the blood pillar originally used the same tan stone as the surrounding walls. It was replaced with a gray stone texture in 1.7, making the lift more obvious. 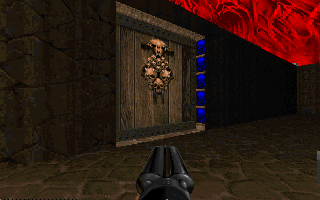 The blue door was highlighted with a bright, blinking light in v1.7.

Some walls in the side rooms before the metal room with the megasphere have had their textures changed to match the surrounding walls in v1.7.

Three deathmatch spawns were added in v1.7. The one in the scrolling spine room was moved slightly.

All secret areas were updated to count towards the secret total in v1.9.

This level has been renamed "IDKFA" in Doom 3: BFG Edition and Doom Classic Complete. The Wolfenstein SS enemies have been replaced by zombiemen: Since the XBLA and Doom 3: BFG Edition versions of Doom II can play network games with one another, this will cause the game to de-sync in this level. As of the January 2020 patch for the 2019 re-release, the Wolfenstein SS enemies have been restored to their original locations.

Like in level 31, the four pillars that can be raised to reveal goodies, along with the two side areas, were updated to count towards the secret total in v1.9.

This level has been renamed "Keen" in Doom 3: BFG Edition and Doom Classic Complete. Like level 31, the Wolfenstein SS enemies have been replaced by zombiemen, and this will cause desyncs when playing with the XBLA version. As of the January 2020 patch for the 2019 re-release, the Wolfenstein SS enemies have been restored to their original locations. 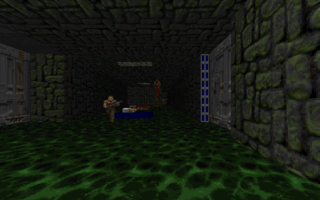 When the classic Doom games were ported to the Xbox as part of the Collectors Edition of Doom 3, the programmers responsible decided to slip in a couple of ancient levels they made back in the day. The included version of Doom II contains Betray, a 1995 level by Michael Bukowski.

In level 2, grab the red keycard, drop down, and enter the northeast chamber that has just opened up. Walk up to the narrow, stone wall in the northwest of this chamber, and press on it to be sent to Betray. Once you complete it, you'll be sent ahead to level 3.

This map is still included within the IWAD in the Xbox Live Arcade, Doom 3: BFG Edition, and Doom Classic Complete versions of Doom II. The exit that leads to it was removed in the console versions, making it unused. Interestingly, the exit is present in the version of Doom II included in the PC version of Doom 3: BFG Edition, but the code to go to level 33 is not, so it will either take the player back to level 1 or restart level 2, depending on which level the game was started on.

No Rest For The Living

The Xbox Live Arcade, Doom 3: BFG Edition, and PSN Doom Classic Complete ports of Doom II feature a new nine level expansion from Nerve Software. Strings for its level name and end text have been added to the executable, along with code to make its secret exit in level 5 function. Additionally, its PWAD contains new intermission map name graphics.

This expansion has its own music track assignments in the XBLA version. Doom 3: BFG Edition reuses the standard Doom II track assignments, and as a result, only level 6 plays the same music in both versions.

The 2019 re-release of Doom 2 lets you download No Rest For The Living as an official add-on. It adds a DMAPINFO lump defining level metadata (name etc.), allowing it to use the track assignments from the XBLA version and changing the sky graphic to SKY3 (the Hell sky) after the first three levels.

Starting with the Xbox Live Arcade release of Doom II, the red crosses on the Stimpack, Medikit, and Berserk powerup were replaced by a red and white capsule. As of the January 2020 update for the 2019 re-release, the graphics have been re-replaced to use the original artwork but with a green cross instead of a red one. The overall changes to the health items were by and large done to avoid legal problems with the Red Cross Organization, who are infamously strict with the use of red crosses in media.

The WOLF patches with Nazi symbols, used in the secret levels, were replaced with their blank wall equivalents in Doom 3: BFG Edition. As of the January 2020 patch for the 2019 re-release, the graphics have been re-replaced with modified versions of the original graphics - the Hitler portrait has had its mustache removed, and all swastikas have been replaced with a triangle emblem from the censored German release of Wolfenstein: The New Order.

All of the Wolfenstein SS enemy's sprites except for parts of the gibbing animation are replaced with poorly offset copies of the zombieman's first forward facing frame in the PC version of Doom 3: BFG Edition, but oddly not on Xbox 360. As of the January 2020 patch for the 2019 re-release, the Wolfenstein SS has been restored.

Several menu strings were updated for the version included in Doom 3: BFG Edition. The previously unused episode selection graphics leftover from Doom are re-purposed for selecting which expansion to play. The updated engine removes the screen size and detail options, and graphics related to these were replaced with ones that read "Gamepad:" and "Fullscreen:".

Graphics have been added for a new menu, which is displayed instead of the original text strings when quitting the game. They allow you to accept/cancel quitting, or go back to the Doom 3 BFG Edition game selection screen. Interestingly, these are only present in the Doom 2 IWAD, despite also being used in The Ultimate Doom, meaning the engine always loads them from DOOM2.WAD.

New graphics obviously had to be made for the secret levels' new names in Doom 3: BFG Edition. The original names were restored in the 2019 re-release, but the graphics lumps in the WAD were not changed (as the names are now displayed using a sprite font in Unity's UI system).

Evil Incarnate and Ultimate Conquest, the two music tracks based on ones from Spear of Destiny and Wolfenstein 3D, which are used in the secret levels and ending cast of characters, were replaced with copies of DOOM, the music played in levels 5 and 13, in Doom 3: BFG Edition. The 2019 re-release restores the original music since launch.

As of the January 2020 patch for the 2019 re-release, the Wolfenstein SS's sight sound has been partially redubbed (the first part is kept, the second part is voiced by Mike Rubits), so that they now say "schutzkämpfer" instead of "schutzstaffel". Their death voices remain the same.