The classic PC game hits handhelds, with some annoying censorship. Weirdly enough, unlike the GBA port of the first game, this one doesn't actually use the Doom engine at all! Mainly due to the much bigger maps of the game, so an engine specifically made and optimized for GBA (Southpaw engine) had to be used. 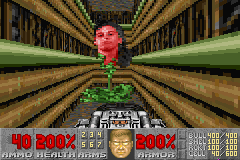 The John Romero head hidden behind the wall in Icon of Sin is, in fact, still present in this version – with, of course, the blood made green per the censorship issue. Due to the lack of a no-clip code, the chamber isn't normally accessible, However, if you run up to where two walls join for at least two minutes until you clip through a wall, then Romero's head can be seen off on the distance! Another way to access this is with a patch code to set the player's coordinates inside this area.

There's a ton of unused Mug Faces in the ROM! Lets begin.

Since cheats can't be activated in Multiplayer and since the Invulnerability power-up doesn't even use this animation like on PC, these are completely unused without some kind of patch code.

The GBA Doom II port surprisingly doesn't turn the head left or right when getting hurt, or look like a serial killer when holding the fire button for a while, these are completely unused. The unused Ouch face from the PC counterpart, is also unused.

There's an unused gibbing sound at offset FDF27C that goes for 7707 samples in length at 8000hz. Despite gibbing being removed from this version.