Join Billy Lee on his journey to rescue Marian from his brother Jimmy. Sheesh.

Unused graphics for a very nice looking credits sequence. In the final, the scene of Billy and Marian reunited is simply followed by a cut back to the title screen.

The final game actually has some leftover code that swaps in these graphics, but unfortunately, this code has a lot of issues, such as following an invalid JSR, which likely means it was abandoned some time before the rest of the game was complete, and there is no proper initialization for this code and synchronization with the current NMI system, so it can't work in the final version as is. Also, there are some errors in text resources with missing data offsets and wrong or missing string sizes.

However, you can see this Staff message in its original place after the ending sequence, just like in the arcade version, with some hacking work. Here [1] is the fixed version with the restored Staff sequence. To see it in action, with the level skip added, just press Select during the game until the ending screen is reached, then wait.

Still, it is not known where the chair graphics were supposed to be displayed and what palette it used. There are no such graphics in any version of this game on other platforms. We can only guess on how it should look like. 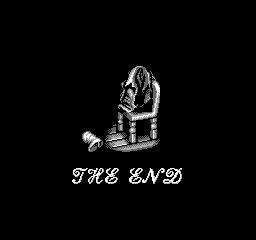 Found near the sprite graphics of the falling stalactite and Mission 4 wall-trap, this is the dragon-head statue from the final area with cracks in it. Also there is a sprite that is a copy of the version of the same dragon, used in the level 4 background, as well as a couple of sprites resembling the broken dragon's head fragments. Most likely, the dragon head was meant to be breakable either as a background static object, or a flying enemy, transforming from the background tiles to a sprite.

Abobo was supposed to have a throwing move similar to the one he uses in the coin-op version. In the promotional brochure for the Famicom version, this move is listed as the genbaku nage (原爆投げ) or the "atomic throw." The English language manual makes a mistranslated reference to this technique by mentioning that Abobo "likes to throw bombs." This move was later given to Abobo's replacement Bolo in Double Dragon II.

With the exception of Abobo and Willy, all the enemy characters have ladder-climbing animations, but Chin is the only one who never uses his. When the player confronts Chin at the top of the construction site at the end of Mission 2, the player can climb back down to the lower floor and Chin will remain still.

Like in the arcade version, the intermission theme before each stage is cut off around the 6 second mark, so it never gets to be played fully.

The U.S. title screen removes the bottom portion of the flames in order to make room for the Tradewest logo (the game's U.S. publisher), along with additional copyright text. It also adds a few flames on the sides.