Billy and Jimmy's third arcade outing, in which they are joined by their long-lost brother Sonny (wouldn't that make them the Triple Dragons then?).

It continues the tradition of Technos' properties innovating gaming, this time in a controversial way though: it introduced shops where players could gain access to characters, moves, and weapons... by putting even more quarters into the machine. Basically, microtransactions, years before they were a thing. 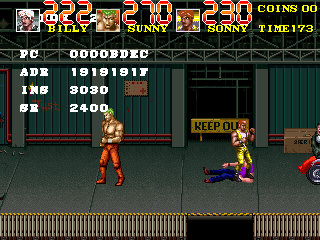 If the game ever crashes, it'll display this exception handler.

Graphic tiles for an early version of the character select screen that was implemented in the later-released Japanese version can be found in the US version, revealing the original plans for the character roster.

As seen on the recreation on the left, the roster originally consisted of Billy and Jimmy Lee (top left and top right respectively), plus the three new fighters: Roney Urquidez (center), Chin Seimei (lower left), and Masahiko Oyama (lower right). In the finalized game, this idea evolved into four groups of palette-swapped siblings (Lee Brothers, Chin Brothers, Urquidez Brothers, Oyama Brothers) in order to allow multiple players to control the same character type. As result, the fifth portrait, meant for Jimmy, went unused in the finalized character select screen since Billy's portrait is used to represent both Lee Brothers (plus Sonny in 3-players mode, a third sibling who didn't exist in previous games). Also, the karate fighter was renamed from Masahiko to Masao in the final game.

The unique "Select Player" banner on the top of the screen also went unused in favor of having the words spelled using a standard font set. The Japanese writings used to spell each character's full name are partially used (albeit, loaded from a separate tile set) alongside a pair of Kyoudai (兄弟) tiles (the kanji characters for brothers) that are loaded as sprite layers rather than as background tiles like the rest of the characters. If you look closely at the Japanese text for the Lee Brothers (リー兄弟), you can see half of the interpunct from back when the text originally spelled out Billy Lee (ビリー・リー).

There are tiles for early 1P and 2P cursors that are more detailed than the finalized versions. Inexplicably, the color-coding is reversed from the usual pattern of having Player 1 as blue and Player 2 as red (the palette data is shared for both unused cursors). There is no 3P cursor in this set, which seems to suggest that these were made before the decision to add 3-players support to the game.

A set of information for the playable fighters, possibly intended for a demo sequence of sorts. It consists of the name of each character, a one-line description, their height and weight, and the name of their signature move (each written in kanji with furigana underneath). Most of this information can be seen on the Japanese version's instruction card and flyer, but since Billy and Jimmy were planned to be separate characters, their data, including signature moves, differ from each other here. The alternate names in parentheses for each move are the localized names that were used on the US version's cabinet.

Billy and Jimmy's martial arts school, the Sou-Setsu-Ken Dojo, was planned to appear in Mission 1, as seen on a screenshot in the game's Japanese flyer. While the area was cut, the background tiles are still present in the data.

A "STONE" indicator that can be seen in screenshots on the game's flyers, possibly intended to show the number of Rosetta Stones that the player have collected. It was replaced in the final version by the timer, but the graphics for it was kept in the tiles for the HUD.

Various frames of one of the Rosetta Stones rotated at different angles. This set of tiles is stored among the graphics used for fonts and HUD. Only the second tile is used; in the second area of Mission 3, the Ashura statue in the background can be seen holding a stone until it disappears after the boss is defeated.

These unused graphics are specific to the Japanese version. Unlike the English version, which uses a font set to compose every message in the game, all the messages were written directly into the graphic tiles, likely in order to get around having to draw a whole new font set for a game with minimal dialogue. Almost everything is used, except for the following three messages:

Present at 0x100 in the main CPU are some hidden developer credits. 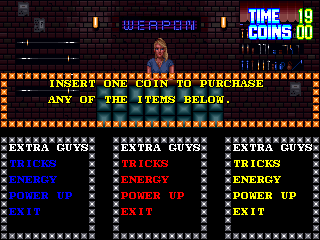 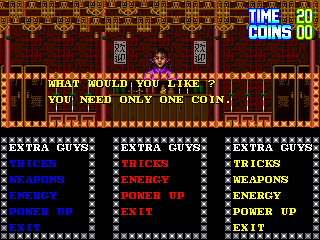 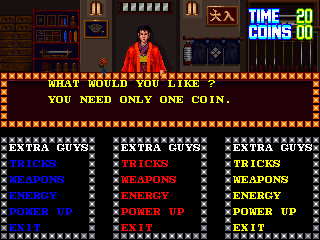 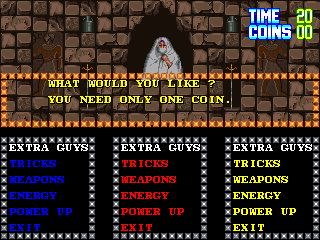 The biggest difference between the US and Japanese versions is the presence of item shops in the former. The US version features an item shop at the start of the first three stages and an additional fourth one in the middle of Mission 5. In these shops, the player can obtain all sorts of powerups by using more credits. Since these item shops are inaccessible in the Japanese version, the game was adjusted accordingly to accommodate their removal: 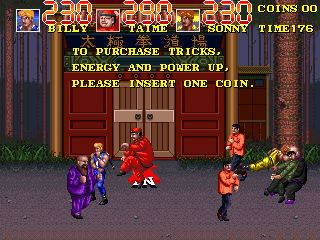 As a result of their removal in the Japanese version, the "IN" indicator became unused and the shops in the stage backgrounds remained present but are no longer accessible, making them purely decorative. Additionally, the attract mode text (seen here) mentioning the shops was taken out and the gameplay demos were redone to exclude the item shops.

In the US version, Mission 1 starts in front of the very first item shop. In the Japanese version, this portion of the area was cut and the starting point was moved to the front of the Power Records building that follows it, resulting in a smaller playing field.

The character-moving conveyor belts and the deadly pitfall in the second area of Mission 1 are absent in the Japanese version, leaving an unusual blank space at the bottom of the area.