Billy Bimmy and Jimmy Lee reunite and team up with a ninja and a kung-fu master to hunt down mysterious stones that will unlock a deadly foe who may or may not be one of their girlfriends.

There is a common debug feature in a couple of Technos games. Usually all debug code is controlled by a memory flag, hardwritten at the end of the ROM at address $FFF6 in M6502 CPU address space. Various bits of this variable enable or disable various debug features.

Bit 7 of the debug variable (to set it, use the Game Genie code EKNYVYAA) switches between normal and "SAMPLE VERSION", which enables some debug features. In the Japanese version, all of these features except the first one were disabled with the code patch. You can restore full functionality with the additional Game Genie code XVNXAPAV. In the US version all options are available by default, but you must enable debug mode first with a button code: at the "Technos" logo screen hold B + Left + Down and wait until the license screen appears.

Now, during the game hold Start on Controller 1, press any of the following buttons to get corresponding effects, then release Start and unpause the game to apply changes.

Bit 5 of the debug variable (to set it, use the Game Genie code AXNYVYAA) enables free walk mode, which allows you to walk to any part of the level instantly. 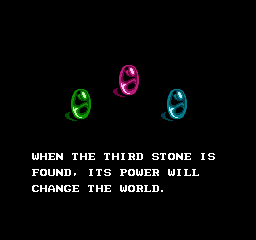 An unused portion of the ending that was leftover from a prototype version (which featured a different script) still remains in the finalized English version with corresponding tilemap data. This screen is still used in the Japanese version with localized text.

The text strings for the character names used on the HUD are all located at offset 0x11BA8 of the English ROM and offset 0x11B8A of the Japanese ROM. Each name is 8 characters long, including the spaces from one name to the next. These names are all used, except Hiruko's, which suggests she might had been planned to be playable at one point.

The text strings for weapons are located at offset 0x11DE5 of the English ROM and offset 0x11DC7 of the Japanese ROM. All of these can used by the player except for the "KNIFE" and HAND SPEAR", which are weapons that are used exclusively by enemy characters. The "KNIFE" refers to the blue knives thrown by the female enemies in the first two stages (as opposed to the "ARMY KNIFE", which can be obtained from some of the bald enemies that appear throughout the game), while the "HAND SPEAR" refers to the knives thrown by the Italian enemies in the later stages. The text strings for each weapon are 11 characters long (including the spaces from one name to the next). Curiously there's a 14-character blank between "SHURIKEN" and "KNIFE", which suggests that there was another weapon listed between those two at some point that ended up being removed.

Note that it's actually possible to get a blue knife or hand spear (as well as the shurikens thrown by enemy ninjas) dropped to the ground if you intercept the thrown blade with a standing kick, but they cannot be picked up no matter what you do and they will eventually disappear from the ground after a while.

The character selection screen uses sprites to display the portraits. Since each portrait consists of 16 8x8 tiles, there are a total of four portraits that can be displayed on-screen (one for each playable character). But the screen actually uses five, since Hiruko joins the player's party for the final stage. As a result, one portrait is always drawn by the background tiles as a special case - it's Chin Seimei's. Its tiles are stored among the font graphics. But a different tile set for Chin's portrait is also stored among the other portraits, obviously unused. It appears to be a more carefully polished version of the portrait compared to the one in background tiles (note the area around the ear and collar). They likely polished the unused portrait and forgot to fix the one that was actually used.

The Japanese version keeps "The Rosetta Stone" subtitle used in the English prototype (and also in the Arcade game) and updates the copyrights date to 1991 (reflecting its actual release date).

The English version alters the premise a bit so that the game now revolves around the rescue of Billy's girlfriend Marian (whose name is spelled "Marion" in this game) once again, perhaps done so in an attempt to give the Lee brothers a stronger motivation for helping Hiruko out. Consequently the identity of the final boss was changed from a resurrected Cleopatra to Princess Noiram, who is described in the ending to be Marion possessed by an evil spirit (hence the backwards name). Despite this the actual Marion never appears as her normal self in any version.

The Japanese version also has additional encounters with Hiruko at the end of Missions 2 and 4, whereas in the English version she only appears at the end of Missions 1 and 3 and during the last few rooms of Mission 5. The Japanese version also changes the order in which the third stone is obtained (and by proxy, the moment in which she joins the player's party and her portrait is added to the Player Select sub-screen).

Sousetsuken (双截拳), which roughly means "Twin Interception Fist", is the fictional martial arts style practiced by the Lee brothers, which was partially named and modeled after Bruce Lee's own style of Jeet Kune Do (截拳道, the Way of the Intercepting Fist).

In both versions, the 2-player mode changes the first screen of the opening in order to show both Lee brothers. For better or worse, the Japanese version doesn't have the Bimmy typo that has since become a meme among western players.

The Black Warriors were the enemy gang in the first game. Despite the similar name, the Black Shadow Warriors in the second NES game (mentioned earlier in the English version) were a separate enemy faction known as the Gensatsuken (幻殺拳) in the Japanese version (despite the fact that both games share many of the same enemy characters).

The name of the wounded student in the first area was changed from Aldo to Brett. The Japanese version makes it clear who killed him from the start, whereas in the English version he dies before he can identify his killer, setting up a mystery for the rest of the game.

Willy was the machine gun-toting antagonist of the original Double Dragon. Jim's name, along with his relation to Willy, are left unmentioned in the English localization and the game simply treats him as just a bad guy that must be dealt with.

Chin Taimei was an enemy character featured in both of the previous NES Double Dragon games. His name was omitted in the English script, likely due to the fact that Acclaim localized the second NES game but not the first and they probably felt that most players might not recognize the name, since the English manual for the second NES game left out the enemy character descriptions present in the Japanese manual.

In the Japanese version Hiruko appears after Chin is defeated in order to tell the Lee brothers the whereabouts of the second stone, rather than having Chin himself reveal this information.

The second and third stones are obtained at the same time after completing Mission 3 in the English version, whereas in the Japanese version Hiruko holds on to her stone until completing Mission 4. The Japanese version also gives a different motive for having the heroes travel to Italy, as revealed during the additional conversation with Hiruko added to the end of that stage.

The English version allows the player to enter the final room before Hiruko falls into the floor and disintegrates, whereas in the Japanese version the player does not regain control of their character until Hiruko gives the following last line of dialogue and then dies.

The English version instead has this additional screen of text explaining Hiruko's cause of death, which does not exists in the Japanese version.