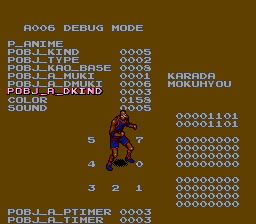 Enter and enable the Game Genie code AJYT-AA3G or the patch code 2926:002 as soon as the game boots up. Then, at the main menu, press Down until you see "DEBUG" highlighted. Press A or Start to enter. Make sure you disable the code after entering the menu to prevent highlighting glitched entries.

The options the player can select include:

The PTIMER shows the frame that is being displayed, while the ATIMER shows how long the animation has been playing for. The third through sixth rows to the right of the character shows what's being pressed on four of the Genesis' controllers.