Dragon Ball Fusions, as the name implies, is a game about collecting and fusing fighters from the ever-expanding Dragon Ball franchise in order to make the biggest and baddest of them all. Chances are, your favorite character is here and can be fused with your other favorite characters, regardless of size difference or any of the other limitations you'd expect. With an RPG battle system like Grandia and a character roster far surpassing even Pokémon Sun and Moon, the possibilities are almost limitless!

Can [your OC here] find a team strong enough to beat rival Pinchi at the tournament? It's all up to you!

After checking the game data and before showing the company logos, this unskippable warning plays on the Japanese version.

Despite being inaccessible in the worldwide releases, the QR Code characters actually did have their names and profiles translated into English. These characters can be accessed by patch codes or by importing an appropriate Japanese save into a non-Japanese game.

Of note, Future Gohanks appears as the first character of these four despite typically being the last one to be unlocked.

Sub-Event 66: Hero From The Future 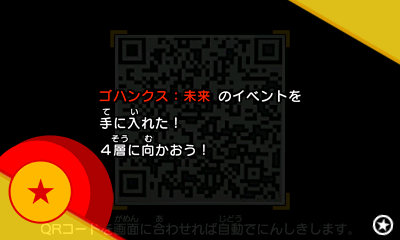 Unlike the other QR Code-exclusive characters, scanning the QR Code for Future Gohanks doesn't immediately unlock him. Instead, a message about his arrival on Floor 4 of the Timespace Rift is displayed. 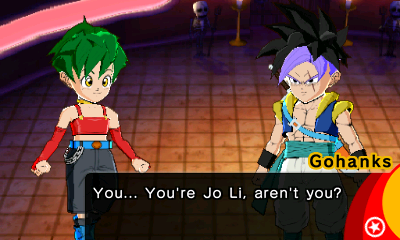 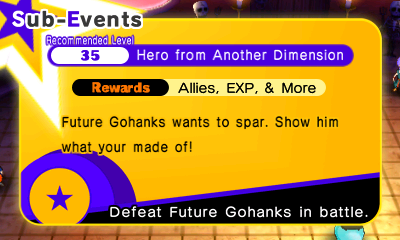 Upon finding him in Baba's Palace on Floor 4, he introduces himself before challenging the player's party to a friendly spar. Every single piece of dialogue has been fully translated into English and seemed ready to go. Sadly, this event remains hidden behind the regional barrier and lost to English-speaking audiences.

Winning against Future Gohanks unlocks him as a playable EX Fusion and awards the player with a pretty substantial 200,000 Experience Points and 120 Red Energy – one of five "currencies" in the game.

For some reason or other, the worldwide releases of the game had some censorship done to it.

In a move that would rival Capcom USA's attempt to censor JoJo's Bizarre Adventure, a joint decision by Nintendo of America and Bandai Namco saw every sword model in the game replaced by… a "wooden katana". All the sword handles and hilts in the game were also replaced by wood, occasionally leading to some graphical oddities in some situations.