Kyoushuu! Saiyajin, or "Assault! Saiyans", is yet another card-based Dragon Ball RPG for the Famicom. This one just happens to be the very first (of what would turn out to be several) game based on the Dragon Ball Z incarnation of the franchise, spanning the whole Vegeta Saga along with a couple of mid-chapters covering the first DBZ movie (Dead Zone) as well. 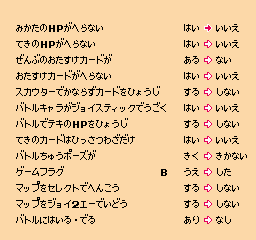 Use the Game Genie code YASEGXGA to re-enable a complex debug menu, where a lot of various debug features can be switched on or off. It seems, from the design of the code that handles exit from this menu, it is meant to be called from anywhere during the game, but it seems that there is no code left to call it. Anyway, most of the menu options are still working.

To enter this menu, just start a new game. The cheats flags can be set manually, RAM variables are $0157 and $0158. They even save into the internal EEPROM, but can't be restored in the final version, since there was a button code to enable this feature, but it was dummied out.

First 8 options are "passive", it disables/enables some stuff, like infinite HP for you or your enemy (first two) or disables password validation in Tournament Mode. The last 5 options are "action" options, which enables some button code shortcuts. Set them all to get a summary of effects: