All playable characters have 48 as their maximum attainable level except for Goku, Piccolo, and Vegeta. Goku's level 48 is actually his SSJ form, while Piccolo is his "fused with Nail" form. This leaves Vegeta as the only character who can in no way attain level 48, however he does have stats for that level.

There are quite a few unused portraits, some with unique graphics not used anywhere else in the game.

Appears to be an early version of the Kami portrait used in-game.

Launch when she sneezes. Although not entirely unused, this portrait is very rarely seen.

Gohan as seen in his first appearance in DBZ. This portrait appears to use a palette that doesn't quite look right.

A Super Saiyan version of Gohan. Perhaps he was once meant to transform as well?

Same as the regular Great Ape, except that it appears to be intentionally colored like a Super Saiyan.

Same as the above version, except it uses the Great Ape Vegeta version as a base.

A fully complete and unused portrait of a Dinosaur, such as the one seen in the show during Gohan's training in the wilderness. This seems to imply that perhaps that segment of the game should have been longer.

The game had a basic Debug Menu during development, the code to normally access it has been disabled. However, by changing ROM address $980D from A90F to A90A then changing ROM address $02E232 from 05 to 07 the default menu on the map will be changed to the Debug Menu. After this, press the 'Up' button to select the last command. Once that's done, press the 'Start' button and you'll be in the full debug menu. The initialization routine appears to have been left out from the final release unfortunately, but with this you'll have the full debug menu on-screen.

There are ten Debug Menu commands: 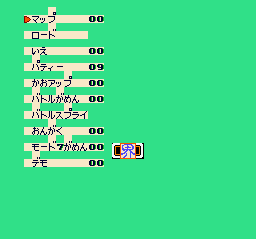