Dragon Ball Z II: Gekishin Freeza!!, or "Freeza, God of Destruction!!", is the fourth card-based Dragon Ball RPG for the Famicom. This one naturally covers the Freeza Saga, but takes a bit of creative liberties with the source material by having all of the Z-fighters who died fighting the Saiyans still be alive to assist Goku in Planet Namek (only Piccolo died) and Goku's Super Saiyan form is nowhere to be seen (likely due to the game being made before it was introduced in the manga). 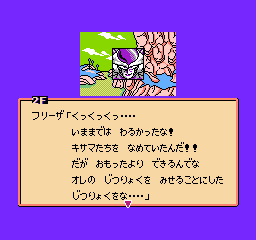 Game Genie code NNNKNZAE will re-enable debugging features similar to Dragon Ball Z: Kyoushuu! Saiya Jin, though unfortunately there is no working menu for modifying the flags. Using the code and resetting the game will set all flags on permanently.

While the code is in use, you can use Controller 2 to pause, win, or skip battles and a number will appear at the top-left corner of message windows, which you can scroll through by pressing A or B on Controller 2.