Dragon Quest XI is a the eleventh installment of a long running series centering on a legendary hero who embarks on a quest to slay an ancient demon lord who threatens the world. Due to the June 2020 discovery of a debug console on the PC version, it has become possible to discover a number of design quirks and otherwise typically inaccessible content.

Another version of this game, Dragon Quest XI S, is slated for release on the PC in late 2020. It is unknown whether or not it will contain a debug console, or anything mentioned below.

There is far too much complexity to the debug console to describe it here, so the following is a list of commands most likely to reveal dummied out content. For more in-depth information, consult this Steam guide.

Normally, one cannot access the lower half of Manglegrove until the second act. By using the teleport debug command, however, one can get down there and even fight the monsters. However, it appears that there are two separate Manglegroves, as the Act 2 changes to the map were likely too extensive to combine the two. The lower one while accessed in the first act is merely a set piece meant to foreshadow Act 2, with no items to acquire. 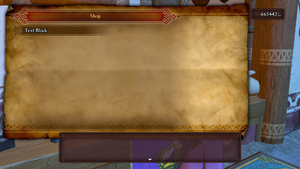 Using the teleport debug command, and with careful placement of the cursor, it is possible to not only get past the Heliodor guards in Costa Valor, it is also possible to scale the steep plateaus leading up to Angri-La. Remarkably, both Angri-La and the Pang Lai summit have Act 1 entries and locations for the Zoom spell, despite Zoom locations being wiped before Act 2. The town itself is mostly unremarkable, as no key actors appear and minor NPCs are in their default states. The regions are also devoid of any monsters.

One interesting quirk is that the the Item shop is in a placeholder state, rather than offering its Act 2 stock. This suggests that every shop has inventories tied to each of the three acts, but one was never programmed for Act 1 Angri-La. This, along with the NPCs, suggest that it is unlikely that there were ever plans for allowing the player to reach this region before Yggdrasil.