Dragon View, also known as Drakkhen II, is a frequently overlooked RPG for the SNES and the alleged prequel to the original Drakkhen.

To access the hidden sound test, press Start at the title screen then ABXY simultaneously on controller 2. Upon leaving the sound test, you can use the L and R buttons on controller 2 to decrease and increase the brightness of the background.

Found in ROM at 16D600 near some magic effects used in the Giza cutscenes.

Found in ROM at 1DE280 near the compass dot and the serpent scales animation.

Found in ROM at 03FD20 are pieces of some kind of person, not organized as shown. 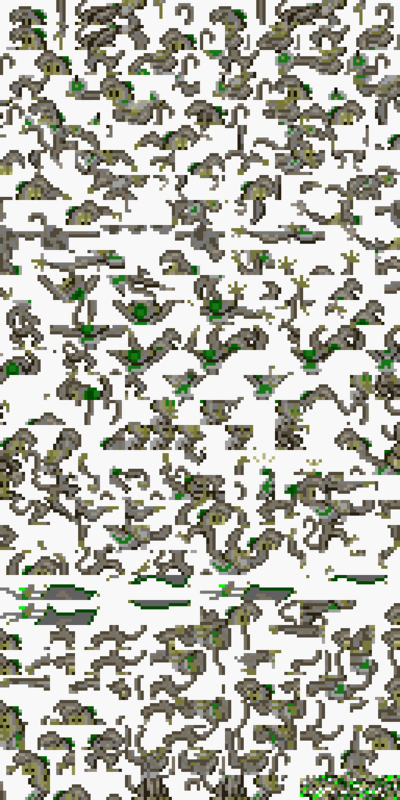 Oddly, found in ROM at 053B60 is a large portion of Abu's sprites from Aladdin for the SNES! These sprites are at exactly the same address in both ROMs, but partially overwritten in Dragon View.

Found in ROM at 187980 is some Japanese text reading "Item Transfer".

Not yet located in ROM, these are loaded to VRAM in every town. The sign is a reference to the ANAKs from the original Drakkhen.

Not yet located in ROM, what appears to be a glowing skull found in the Underworld region of the World Map in the same manner as above.

Not yet located in ROM, some greenish rocks found in the Snowfield region of the World Map in the same manner as above.

Dragon View has a few normally-inaccessible rooms. Every room in the game is assigned a unique two-byte "Room Number" at address 7E3CFF (wide rooms take up two room numbers). The list of used rooms extends from 0000 to 03FF, with several gaps along the way. Notably Room Numbers between 037A and 03D7, as well as all rooms ending in FB or FC, produce glitched results and do not seem to exist. The remaining unused rooms are as follows:

In every room, the game stores the room number of the room to the left at 7E3D19. To access any room simply write the two-byte room number to that address, then exit the current screen to the left.

Certain values of the room number are also not actually rooms but rather special functions:

The Japanese and North American releases have completely different title screens. In addition, the Japanese version of the opening cinematic leads directly into the title screen with an animation of the words "Super Drakkhen" spinning into place, complete with sound effects.

The only other difference known at this time is that an extra sound effect will play after receiving an upgrade to your sword or armor in the Japanese version.