Drawn to Life is a platformer with a cute story that allows you to draw your own playable character, the weapon(s) you use, and various level objects.

A checkpoint flag found with the rest of the World 1 graphics. This is the only checkpoint flag in the game's data, and would have functioned exactly as you think it would.

Runes found alongside the assets for World 1.

A chain found with the World 1 assets that wouldn't look out of place with the late-game World 4 levels. The correct palette doesn't seem to exist.

A suit of armor located amongst the various background objects for World 4. Its appearance suggests it would have been used in the Rapo Towers level.

The old man Raposa has a complete animation for facing upwards, but due to a bug, only the first frame is used. 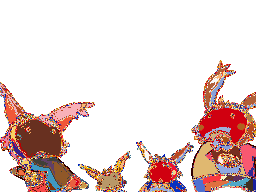 An early design for the game's title, as well as an image of several Raposa intended for the title screen. The final instead solely features Jowee.

Early sprites for the Shadow Bat enemy found under the name "SmokeBat". It only has animations for flying. The correct palette no longer exists.

Early sprites for the boss Frostwind. These parts are named boss_snow, rather than Dragon[Bodypart] like the used sprites. While the earlier head part is just missing minor details, the earlier body part has a different design from the final, with the upper area covered in ice. There are also two parts for the body as opposed to the final's one. The tail part is smaller and lacking detail, as well as missing animation like the final's.

Located with the early Frostwind parts is an unused frame of his head tilted upwards slightly. 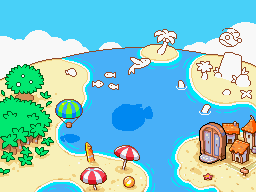 An early version of the World 3 map screen. It is a work in progress and is missing many important details, such as leaves for the trees, sand castles, and of course colors for the details in the top right.

Background is likely referring to the background of the top screen when in Draw Mode. It is likely they were interchangeable at one point rather than changing as the story progresses.

An unused line intended for Wilfre located after his used "defeat" line. He was likely intended to have said this during the part of his defeated animation where he briefly changes back to his normal form.

A line of text referring to a "FINAL GATE" can be found within the text files for the levels. This would have presumably been used for the header for the gate leading to the Shadow Lair, the last level of the game, but said gate uses the village's name instead, like the rest of the gates.

Inside the .sdat are three unused .sseq files. None of them have accompanying .sbnk files, and the first two on this list are followed by alternate (used) tracks.

Present in the "audio" folder is an .sarc folder containing what seem to be pathways to all the songs and sfx present in the game. At the start of the file is an electronic signature by David J. Franco, the composer of the game.

Many of the pathways reference folders that do not exist anywhere in the directory. An example is below.

Isaac the shopkeeper is referenced internally as Wilhem. This name may have been changed to avoid confusion with the game's antagonist, Wilfre.

The Flyin' Rabbit enemy (known internally as snow_flyer) is grouped with the assets for the Snow Gate levels, despite not appearing in-game until Twilite Woods, the first Forest Gate level and only ever appearing in both that level and Moon Grove. There is a flying enemy that can be seen in a prerelease screenshot from 2006 in a snow level, which may explain the Flyin' Rabbit's odd placement and internal name.

In the Japanese version, the Touch Screen has the word "Draw!" removed, and the color of two of the swirls surrounding Jowee were altered. 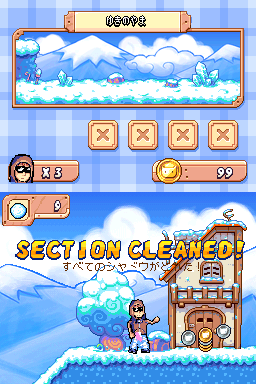 Text appears underneath the "Template Found!" and "Section Cleaned!" text in the Japanese version.