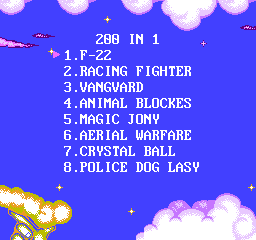 For whatever reason, the entirety of the dreamGEAR My Arcade Retroplay Controller (also sold as the My Arcade Retro Machine, the predecessor to this console) is in the data, from address 02000000 to 02800000. However, two bytes were altered, making it only load F-22 instead. With the data extracted, at addresses 08000C-08000D, replacing 81 and E7 with C9 and EB will allow the menu to run. Roughly 150 games present here are unused and inaccessible in the main 300-in-1 menu.

Alongside the 200-in-1 menu, there are a number of unused games inside of the system's code that are not part of the main menu. Some were seemingly excluded out of legal fear (namely Pac-Man, Ms. Pac-Man, Super Mario Bros. and Tetris variants); a few others seem to be removed due to being flat-out broken, or just plain confusing. These unused games includeː

Furthermore, there are even more games that are unused in the Retro Arcade Machine X, though were left intact in some other distributors' versions of the mini arcade (such as the Thumbs Upǃ Mini Arcade Machine and Multicade 230). 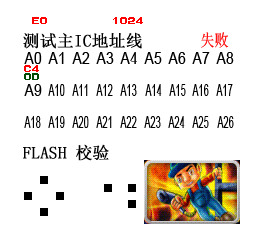 A test menu (featuring controller, IC and FLASH tests) can be accessed by holding the A and B buttons while powering on/resetting the console.