The My Arcade Retroplay Controller is one of many, many plug-&-play systems from dreamGEAR, but this one shamelessly includes some lazy hacks of legitimate Famicom games (including several fan-made hacks) among the typical Nice Code junk.

The menu includes a lowercase font which is never actually used, despite most of the names in the menu being written with lowercase ASCII letters internally.

This string can be found at 0x7C10C in the ROM. While the "200 IN 1" part of this text is used, the ID that immediately follows it is not.

This string immediately follows the list of games, found at 0x7CCCA. It refers to the test program hidden in the unit, as shown below. 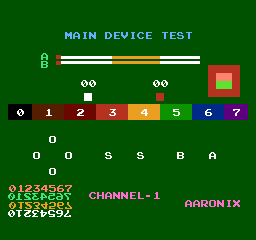 Hidden in the ROM is a program used to test the unit, which can be accessed by holding A + B and resetting it. Oddly, it's credited to Aaronix, a company that produced Famiclones in the 1980s but seemed to be defunct by the time this unit was made.