DuckTales Remastered is an HD remake of the classic platformer game that almost everyone remembers. WOO-OO!

The remake added several elements, such as a tutorial level set in Scrooge's Money Bin, as well as reuniting the remaining voice talent from the original show. Notably, this was one of Alan Young's final performances (both as Scrooge and in general) prior to his death in 2016.

This script, located in global.pak, was used for testing the cinematics.

Another testing script, again located in global.pak. It mentions a pak named williams which doesn't exist in the game's files anymore.

Still located in global.pak, this script was used for testing entities, and it mentions a entity named WILLIAMS. 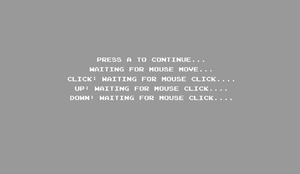 Present in global.pak, this menu looks like it has been used for testing or is from early development, as it doesn't look like any of the menus from the final game. 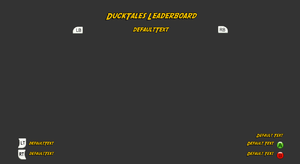 Present in moneybin.pak, this menu is a leftover from the Xbox 360 version.

All the game's music is located in the file music.fsb, including some unused tracks.

A short guitar riff named deleteme. You can probably guess why it isn't used.

WF_Logo_Music_Standard, the classic WayForward ident jingle used in several of their other games such as Adventure Time: Explore the Dungeon Because I Don't Know! and the Shantae series. The final game instead uses a custom variant, WFLogo_DT_Revised.

The original version of the Himalayas stage music, named m_stage_himalayas, which fits the pattern of the other stage music filenames. The song was updated to better match the style of the other songs, and was put in the game as m_himalayas2.

For some reason, the Transylvania music from the May 25, 1989 prototype of the NES original is included as m_transylvania_NES_beta!

The full DuckTales theme song is included as m_theme. The credits use a different, extended version. This one was heard in the very first trailer of the game.

A non-looping version of the title screen music is included as m_title_unlooped.

The game has a few bland-looking PNG files that were supposedly for a save file feature. However, the PC version is only able to have one save file.