Dudes with Attitude is an unlicensed NES puzzle game. Happy, Dude, Foxy, Babe, Patch and Bozo (who are being referred as "the dudes") are on a mission to uncover buried jewels on Caribbean islands. Gameplay involves controlling one of them as they bounce back and forth across the screen trying to acquire the jewels on the playfield.

Within the font, there are 24 unused characters.

Two blocks that say "UNDO" and "REDO". They don't seem to do anything no matter what color you are. 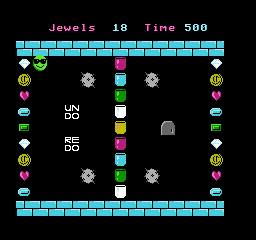 Hot coals. It makes you die if you touch it two times. While it doesn't appear in any levels proper, it is available in the game's level editor. It also makes an appearance in the 1994 reskin. 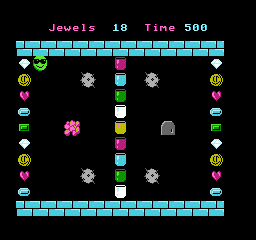 Blue, gray and red hourglass. For some reason, when you try to get these objects to appear in the game, a shuriken appears near them, which makes it almost impossible to interact with them. Just like the "UNDO" and "REDO" blocks, they don't seem to do anything. 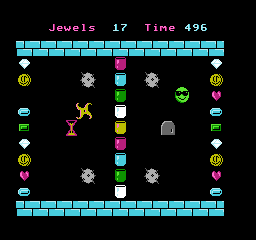 In 1994, the game was rereleased under the name Trolls on Treasure Island. In this version, all characters were reskinned to look like The Trolls (based on the famous series of plastic dolls).

Other than the obvious logo overhaul, the background was changed from black to blue and "PRESS START" text appears differently. The copyright texts were also moved closer to each other and the year was changed from 1990 to 1992, which is strange considering that the game actually came out in 1994. Seems like the development started much earlier than it was released.

The borders were recolored to pink and made much thicker, ability to select your own character was removed (so there is only two instead of six) and the window was slightly shortened.

While Dudes with Attitude lets you play the first four stages at the very beginning, Trolls on Treasure Island only allows you to play the stages in a linear order. The map was also completely redrawn, with the ocean becoming much darker and the compass getting moved to the top of the screen.

Trolls on Treasure Island mostly has graphical differences, but the gameplay also went through some changes. All 32 stages were redesigned and the troll's head was added in the HUD that changes based on player's actions. Also, whenever you become red (which is done by pressing B), the "Jewels" text gets replaced with "NO NO", "NO DON'T, "HEE HEE" and other messages. This feature wasn't present in Dudes with Attitude.

Music that plays at the menu screen is different in Trolls on Treasure Island.

This robotic sound that plays when the character becomes red was replaced with a squeaky noise in Trolls on Treasure Island.