Those alien bastards are going to pay for making me travel back in time, again.

Enter C-Up, Up, C-Left, Right, C-Down, Down, C-Right, R, A, B on the title screen. Note that this must be on the first title screen which reads "Press Start" and not the second one which allows you to select Options, etc. A horse will neigh to confirm correct entry. Start the game, and the debug menu will be located at the top left of the screen. 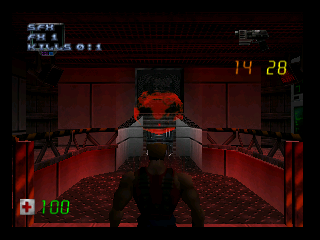 (if pressed while already in third person, the camera will attempt to zoom in a minor bug) 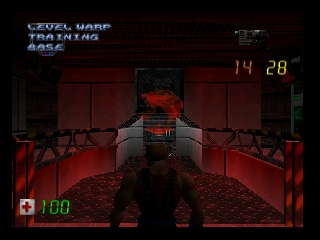 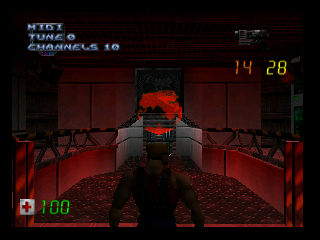 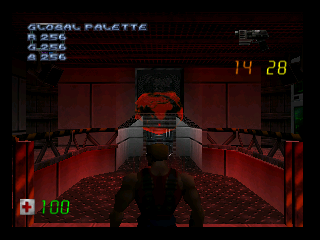 Affects the texture color of all non-specifically colored sectors. All 256 is default.

On some levels, Global Palette does not work. This is always due to the fact that the entire level is covered with colored light sectors, which obviously aren't affected by the global palette (or even the no textures cheat). 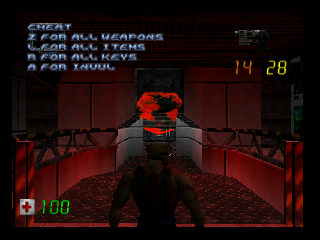 Self-explanatory for the most part.

All weapons gives you 999 of every weapon except the Volt Cannon and the Freeze Ray, even if the maximum isn't 999.

All items will give you everything. In the Western levels, you obtain the Diving Helmet despite it not ever being available in the level set.

All keys will give you all the keys available in the level. Actually, it just turns all the Key flags on, so you have whatever keys are available in the level plus around thirteen blank spaces on average (I'm guessing the key space takes up an entire 16-value byte). This also allows you to see keys not normally viewable (such as Alien Plans). 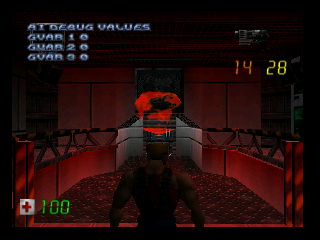 Didn't test these extensively, but AFAIK they don't visibly affect anything.

Completely blank. Probably just a setting which clears the screen for screencaps and normal play. 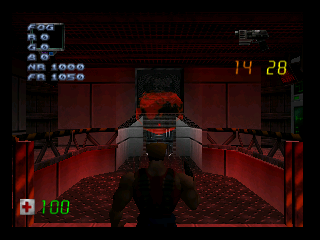 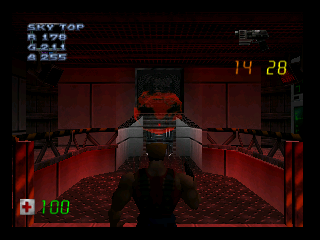 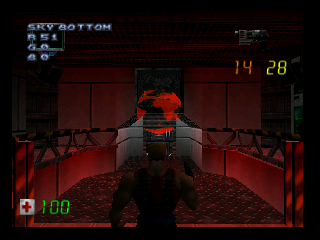 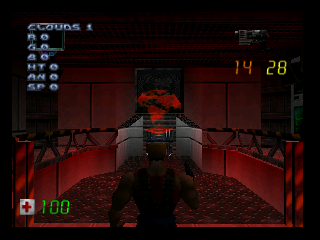 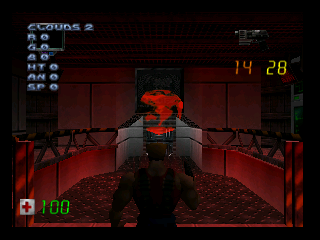 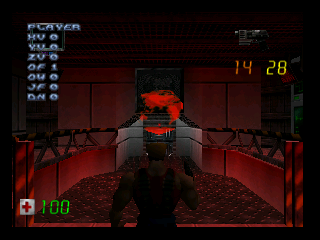 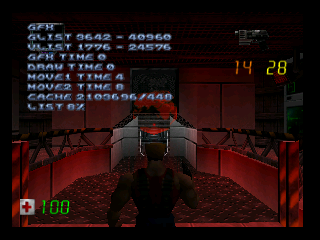 GLIST : No idea. Seems like the second number is the "upper limit" of the RAM, though.

GFX TIME, DRAW TIME : These two never change from both being zero. Perhaps they only change when the level loads, and it's technically impossible to see them move?

MOVE1 TIME, MOVE2 TIME : Both seem to have something to do with the frame rate; they skyrocket when something taxes the system, like having INVUL on and standing in front of the two BMF sentries in "Up Ship Creek". MOVE2 will shoot into the mid hundreds when there are a lot of active, unkilled enemies in the area; enough to slow down the game engine.

CACHE : Left number seems to be total memory in bytes. The second appears to be the amount of memory (possibly in KB) used for storing the level at the moment.

For LIST, I have no idea. Appears to be a percentage of something, but it isn't processing power or CPU Usage. 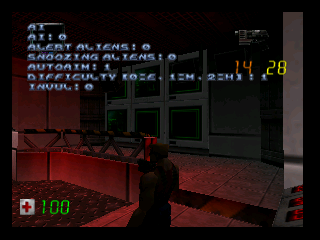 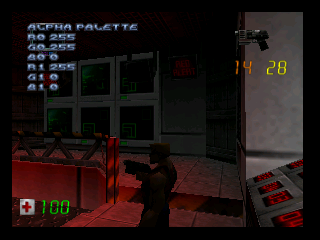 There are several tiles from Duke Nukem 3D or Duke Nukem 64 present in the game. They are used as placeholders for effectors or models. 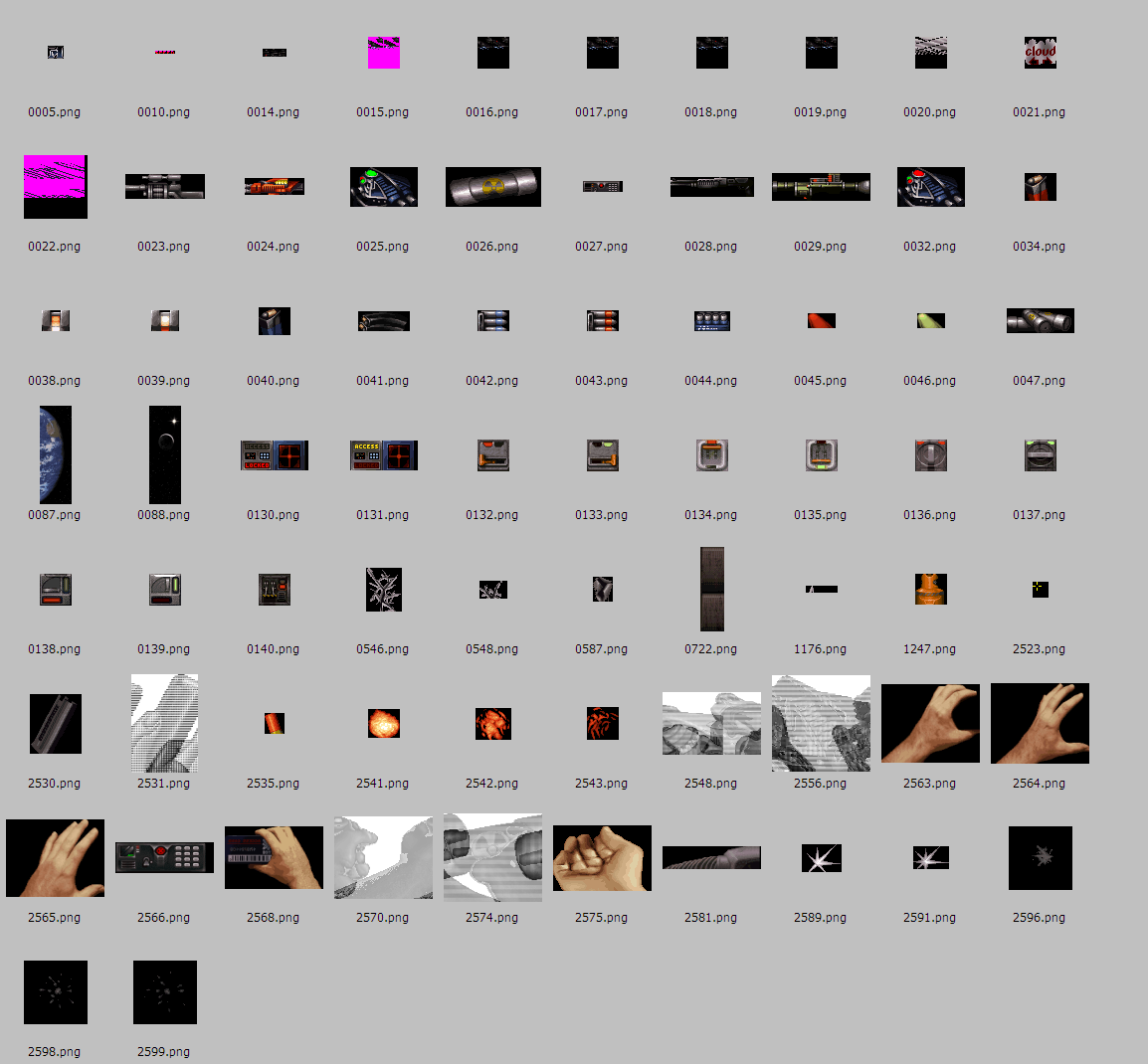