Duke Nukem Forever was intended to be the series' fourth main game after 3D, but ended up spending well over a decade in development hell, going through so many concepts, developers, staff changes, engine swaps, and pushed-back release dates that the game became a punchline...but come out it did, including a "Balls of Steel" collector's edition containing all sorts of nifty stuff and an announcement that GameStop would honor pre-orders from past years (which ended up including a customer who had preordered the game in 2001).

The finished game itself, on the other hand...let's just say the wait probably wasn't worth it for most. Especially a certain gray cat.

From engine.int and the 3D Realms days, presumably before Steamworks auto-updating was added:

From dukeed.int, it seems the game's schoolboy humor even extended to the editor:

A model named "Mightyfootmelee" exists, suggesting that Duke's signature melee attack was set to return. However, the model is just a box.

Logo cinematics for 3D Realms and Triptych. All companies involved were featured in a single cinematic. This version of the 3D Realms cinematic was seen in some of the early trailers for the game.

The trailer and upsell screen, along with the standard ESRB notice from the demo are still in the files.

There is also a model of Duke with a textureless head and hands used for the trailer, plus his lines for the very same trailer. 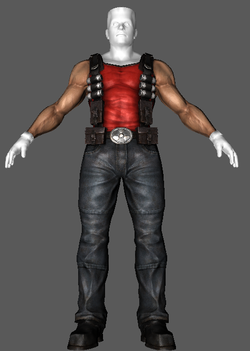 An older version of the Duke Nukem Forever logo, seen in the E3 2001 trailer.

A few test models are present in the files. allprimitives contains all of these models in one, but there is also a separate file for each model.

Phew, Duke can breathe again! While he does complain that going in the water will ruin his hair, this line is never played.

A line that could have been used in multiple places, but isn't. It's worth pointing out that this and another used audio file start with "Duke" rather than "DUKE" (which is what the rest of the files use).

Some lines from the DLC " The Doctor Who Cloned Me " for a cut joke related to the donkey from the level "The Burning Bush".

A pair of placeholder lines for General Graves, referencing something that does not happen in the game.

A placeholder line for Duke's Computer.

An alternate rant from the host of Damn.. It's Late.

For comparison, the used version:

After the report of the aliens invading Duke Burger in Damn.. It's Late, a second news story starts as the audio fades away, leaving the full report unused.

Ambient lava sounds. There is no lava to be found in the game.

Both Japanese and Spanish versions translation/dub localizations went the extra mile in detail by changing the "Yeah, but after twelve fucking years, it should be." dialogue line and comical reference to the game prolonged development cycle to a probably more accurate fourteen years timeframe, which supposedly owes to the fact that the first iteration of Duke Nukem Forever was originally announced in 1997 and it took fourteen years until the final game released in 2011. The twelve years timeframe in the English dialogue seems to stick to the 1999-2011 copyright presented within the game.