E.V.O. is a unique side-scrolling pseudo-Action-RPG where you help direct the evolution of life on Earth. You start as a fish, and progress all the way up to a human by spending experience (EVO) points to upgrade your body. 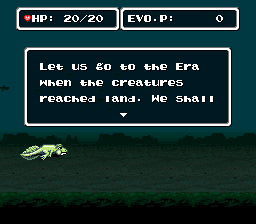 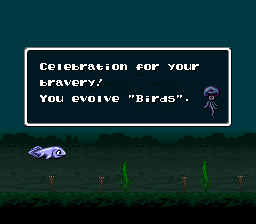 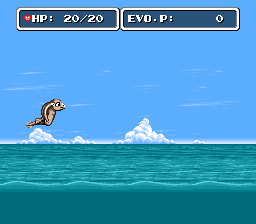 Shortly after bootup, the programming at SNES address $008184-008195 initializes a set of six memory addresses to the value $00.

Unused. No programming reads this address.

Unused. No programming reads this address.

Set this memory address to a non-zero value to enable what appears to be a debug map viewer type mode.

This holds the debug flag to freeze enemy behavior described in the previous section above.

Holds the infinite health debug flag described in the previous section above. 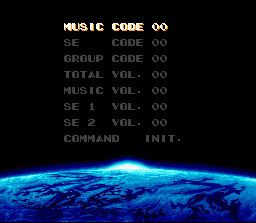 To correctly switch between songs, use Stop Music, change the Music Code, then use Data Transfer and finally Music Start.

Don't use Command Init. or select a Music Code index higher than 28, as the game will crash.

There are two songs and four jingles that can be heard via the above sound test, but do not appear anywhere in the game.

Music Code: $01
The music from the prologue of 46 Okunen Monogatari ~The Shinka Ron~, the text-based adventure E.V.O. is based on.

Music Code: $0E
The ending music known as "To a New Evolution" from 46 Okunen Monogatari ~The Shinka Ron~. Oddly enough, this track appears on the Symphonic Synth Suite album that coincided with the game's release.

Music Code: $1A
This could have been intended as an alternate "Evolution" fanfare.

Music Code: $1B
No clue where this jingle could have been used. It most resembles "Whispers from Above", the short jingle that plays when you overhear "mysterious voices".

Music Code: $1D
This doesn't sound like anything else in the game, although it actually brings to mind an RPG "Inn" jingle. Unlikely to have been used for such a purpose, however.

Music Code: $22
Possibly intended as an item jingle, although there are no items to collect in this game.

On the overworld map, the programming at SNES address $009949 checks if L is pressed on Controller 2. If so, it loads value $01. At one time, this was followed by a STA $075C operation to enable the debug feature to skip areas, but it was removed for the final build.

On the title screen, the programming at SNES address $1ECDDF checks if Select is pressed on Controller 1. However, it doesn't do anything further with it. This is located pretty close to the sound test entry point, and was probably the method used to access it.

The string FURUTA (for programmer Tetsuya Furuta) is written to save files and evolution records. When loading a save file, or using Review of Evolution, the game looks for the string to determine if data exists in that slot.

The Japanese text was removed and replaced with a small rock in the North American version.

A bunch of crap was removed from the American version...literally. These steaming piles were taken out of the Chapter 3 area Domain of Brosasaurus. The actual graphics weren't deleted, just the area data was changed to not include them.