eCrew Development Program is a Japan-exclusive DS game which was designed to help train McDonald's employees, and as such was not sold at retail. It was dumped in 2020 after someone bought a copy from Yahoo Auctions. 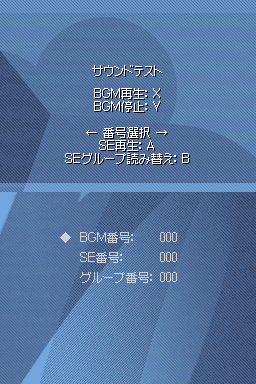 The game contains a sound test which allows to play the music and sound effects from the game, with most indexes being unused. The Top Screen shows an explanation of how to use the sound test. 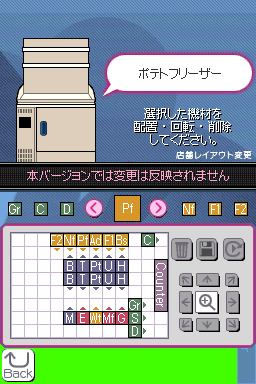 The game contains an unused layout editor to be able for managers to recreate their McDonald's kitchen in the game. In the end, this was replaced with a simple option menu asking for moving directions inside the kitchen.

In the editor objects like freezers, roasters, and shelves can be moved via drag and drop from the selection at the top of the screen. Each letter combination stands for a device, which is shown with its full name on the Top Screen. Objects can be rotated by 90° by selecting it and pressing the arrow-circle icon, or removed by clicking the trashcan. The magnifying glass zooms in and out allowing to change the grid size to make placing easier. The arrows around it are to move the camera in the bigger grid.

Action Replay code 0200EBC0 03A0002B will load into the layout editor when the game is launched. The saving option is disabled by default, but can be enabled with the following Action Replay codes: 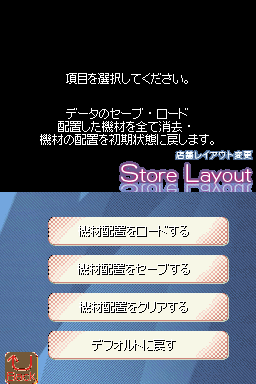 Pressing the save symbol reveals another unfinished menu which has a broken Back symbol in the corner, borders for selected options that don't fit the button sizes, and pressing on one of the options sometimes cause the game to glitch which fuses the editor with the save menu. The four options all work correctly and do the following:

Pressing on Back brings the user back to the editor. 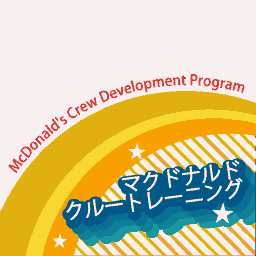 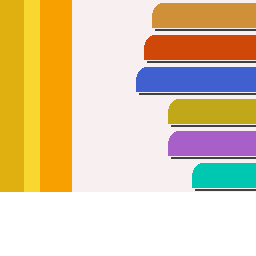 Two unused graphics which state "McDonald's Crew Development Program" in English, and then "McDonald's Crew Training" (マクドナルド クルートレーニング) in Japanese, as well as six buttons. This is likely an early main menu, given the cohesive nature of the two graphics. 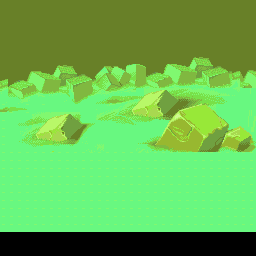 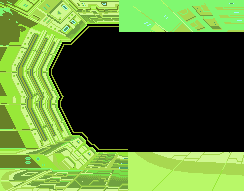 Present in BG.NSCR. While the left image is unknown, the second one is a background from a Metroid Fusion prototype (specifically from the docking bays of the BSL Research Station). These are part of the Nintendo DSi's official SDK.

The game contains seven unused tracks, though their internal names are very generic and give no indication as to where they'd be used. As with the used tracks, these make use of the McDonald's "I'm Loving It" leitmotif.