A much-improved port of the original Genesis release with an extra stage and a groovy CD soundtrack. Plus load times, but what can ya do about those? 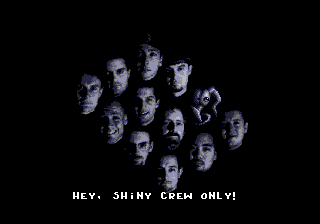 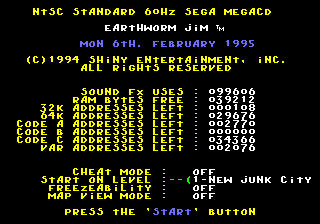 The same Debug mode that was in the Genesis and SNES versions is still here. This displays information about how much RAM is used by the game, as well as its build date. During game play, pause the game and enter the following code: A+B, C, C, A, A, B, B, B+C.

A screen showing the Shiny Entertainment staff will appear, followed by the debug menu. Interestingly, the message that appears on this screen, "Hey, Shiny crew only!" was meant to appear on Earthworm Jim 2 on the Genesis as well.

The PAL version of the game was built a month and a half after its NTSC counterpart.

By opening the CD on a computer, there are some text files containing messages you wouldn't be able to see otherwise.