In Ecco the Dolphin, you control a dolphin with some unusual marks on his head. After a waterspout, his pod vanished, and he was left to roam the seas in search of it. After talking to an orca and a blue whale, he was told to visit the Asterite: a wise creature made of spheres. The Asterite is eager to help, but is missing some of his globes. Ecco is sent to the past to retrieve the spheres, and does so by kicking them out of the past Asterite's body. Hence, the Asterite only lost his spheres because he told Ecco to remove them in the first place. After that, Ecco is sent back to the past, now with a new power, and is sucked along with his pod to face the evil Vortex race. Yes, there are paradoxes, time loops and alternate timelines, but that's the least of your problems, given that the game is hard and usually ready to scare you. But hey, at least there's the kickass Pink Floyd-inspired soundtrack to keep you sane whenever the game really doubles down on you.

The stuff on this page is about the US version, except for the Japanese version's section. 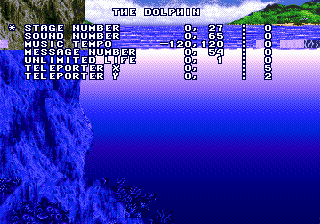 In game, turn to either side and pause the game while Ecco is facing the camera. Then, press Right, B, C, B, C, Down, C, Up. A screen titled "The Dolphin" will appear, and you'll be able to change some settings.

By changing address 00FFB86F, one can change the options below the visible ones. The values for them (at least for the first 3) are 00FFF830, 00FFF834 and 00FFF838. Changing their values may cause you to go to different stages.

There are some unused songs in the game, accessible through the debug menu.

Sounds like it could belong to an island-related level.

Sounds like it could be used in levels that are mostly played in deep waters.

A bit similar to 18, but this one sounds like it belongs in the ending. 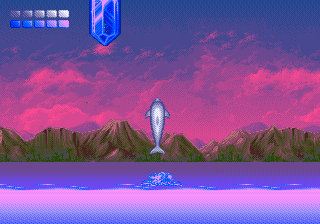 This (the top-left one) can be seen if you disable layer Scroll B High.

In the top left and top right corners of Origin Beach are 2 glyphs, hidden inside the walls. If you use your sonar on them, you'll get the following messages:

Ed Annunziata said that this was the answer to a question put on earlier in the game, "Why do dolphins live in the sea?". These glyphs were meant to be ancestors to Ecco, but due to time constraints, they were simply moved out of the way.

There are also other unused messages, without a source:

A turtle with four animation frames exists in the game. It can be seen by going to ROM address 0x86642 and replacing the 97 with 0F, 10 or 11. Start a new game and check the unique shell under the entrance to the next level; it should be replaced with the turtle. (The stray pixel underneath the tail is present in the original graphics.) 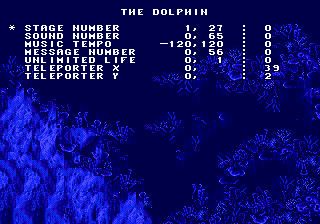 The debug menu doesn't overlap the current screen. Instead, it fades to black and changes the background to a regular ocean backdrop. And when you leave, the music continues where it left off, whereas the music goes silent in the US version.

The first option also starts with the value 0 instead of your current level number. When you try to view a message, the game shows it to you (in Japanese, obviously), and quits the debug menu, instead of staying on it. This version also adds 2 extra messages, as the number can go from 0 to 56.

There are 3 songs that are only used in the Japanese version. However, these can still be heard in the US version's sound test.

This theme plays in Cold Water.

This one plays in the extra level, The Stomach.