A platformer version of the console game of the same name.

Some crudely written, hard to read text saying "No Attachments, See at the Slingshot".

A bunch of placeholder graphics for various functions.

Along with debug features, scattered throughout the ROM are names of test levels. 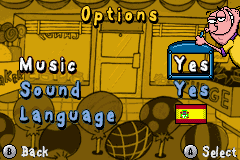