Eien no Filerna (Eternal Filerna, sometimes romanized as Filena) looks like Final Fantasy V, plays like an especially backtracky JRPG, and sounds a bit like a bad hangover. Combine that with the fact that it came out a couple weeks before Chrono Trigger and you don't exactly have a recipe for success. What little chances it had of making it out of Japan were shot down by the sexual themes and unsubtle lesbian overtones, but at least the birth scene is slightly less awkward than the one in Final Fantasy VI. 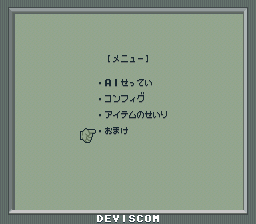 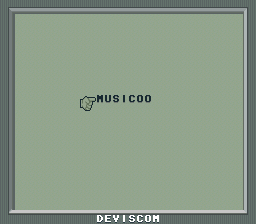 To access the game's hidden music player, highlight the リラのでんしノート item ("Lila's PDA" in the 2009 English fan translation) in the inventory, then press A once to make the cursor start flashing. Hold L + R, then press A again. The configuration menu will appear with a new fourth option, おまけ (Bonus). Selecting it opens a barebones sound player. Up and Down scroll through the game's 35 tracks, and A plays the currently selected one.

Some of the tracks in the music player don't seem to be used anywhere in the game.

Quite a few of the game's items aren't used. A few are disabled debugging leftovers, while others are perfectly normal items that apparently just didn't make the cut.

To access these in-game, enter the pair of Pro Action Replay codes given in the tables below to replace the first slot in the inventory with the given item. 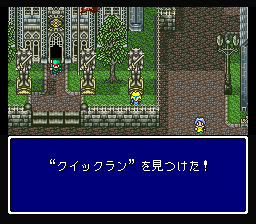 While not unused, this useful item is hidden in an incredibly obtuse way, and there's no hint in the game that it even exists. Go to the outside of the Coliseum in Dorah, where there are four statues that look like ordinary background decoration. Numbering the statues from left to right, face the front of each one and press A in the following order: 1, 3, 2, 4. There's no audio or visual confirmation for each press, but inspecting the final statue yields the クイックラン (Quick Run), a pair of boots that quadruples the party's running speed on the overworld when equipped.

Note that this item is the last one in the game's internal ordering before the filler slots of "Nothing", suggesting it was a late addition.