Answering a mysterious summons from the leader of the Knights Templar, a 12th-century Muslim assassin finds himself thrown into a globetrotting adventure through space and time to gather religious artifacts, stop an ancient evil, and backtrack as much as humanly possible. 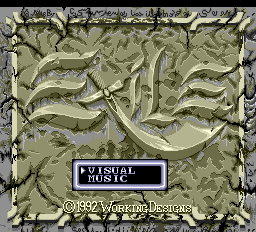 At the title screen, press Up, Up, Down, Down, Right, Left, Right, Left, II, I to access a combination sound test and cutscene viewer. 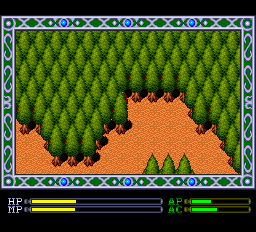 In Mosnee Pass is a well-hidden cameo from Yuuko, the protagonist of Telenet Japan's more (in)famous Valis series. To find her, go north from the area's entrance to the first bend in the path. Directly above Sadler's position in the screenshot (a bit of his cape is poking out from behind the trees) is an invisible passage leading north through the woods. 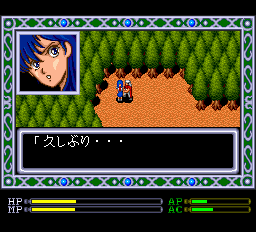 Follow it to reach this clearing, where Yuuko talks about how she came to France because she got tired of fighting. (The US version replaces this with made-up dialogue about how "Exile 2: THE REVENGE" will be coming out on the Super-CD.) There's then a mini-cutscene where the party members turn to face the opposite direction while she changes from her school uniform into her Valis armor.

Exile's US release was one of Working Designs' earlier localization efforts. Though it has quite a few rough edges – indeed, parts of the script appear to be basically accurate translations of the original text! – it still bears many of the company's hallmarks, such as the "localizers first, developers second" credits and jacked-up difficulty.

Presumably as part of its "foreign" aesthetic, the Japanese version actually has much of its system text in English, including menus, item and equipment names, and so on. The US version leaves the vast majority of it untouched, but the main menu was slightly modified: "DRUG" became "TONIC," and "MAGICK" was reduced to just "MAGIC."

Additionally, the US script removes most explicit textual references to religion. All real-world place names were also fictionalized, e.g. "Jerusalem" to "El-in," though it's not clear if this was a purposeful change or if the names just wouldn't fit because of the crappy English font.

The US version of the game completely removes the "Warp" spell that returns Sadler to the beginning of dungeons, forcing players to backtrack all the way through each level in order to leave.

Also visible in the screenshots above is a bug introduced in the US version: the translated "Use/Stop" menu was moved downward so it doesn't cover the main menu, but the tile priorities are not adjusted to compensate, meaning any sprites in that part of the screen will overlap the menu.

The game's two treasure chests that contain gold (out of its incredible six chests total) contain different amounts in the US version:

This results in a net loss of 100 gold from the game, for whatever difference that makes.

A Working Designs release wouldn't be complete without cranking up all the enemy stats, of course. The changes here are at least within the bounds of sanity...unlike the sequel.

In the tables below, instances in which a stat changed to make the game harder have been marked in red. The cases where a stat change benefits the player are marked in green. Instances in which a stat changed detrimentally by more than 5 points and constituted a change of 50% or greater from the original amount appear in magenta. Enemies whose stats didn't change are omitted. Some stages are omitted due to not containing enemies (Homis Shrine), or being near-duplicates of other stages (e.g. the two versions of the Mosnee Pass Cathedral).