FIFA 11 is the whateverth installment of the FIFA franchise.

A few unused camera modes in the game. The codes below apply to all of the European, Australian and North American releases. 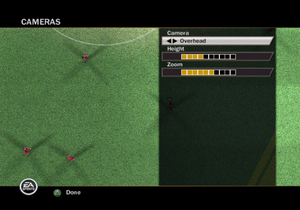 Internally labelled as RETROCAM and Overhead in the camera options. 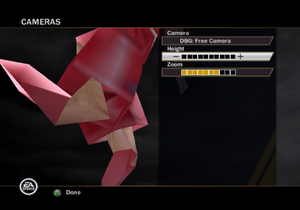 Internally labelled as ALLOW_DEBUG_FREE_CAM, but it seems to be barely functional. There's no way to control it yourself, it may randomly freak out, and even crash the game. It can be very slightly moved around by screwing with the Height and Zoom parameters of the camera while in the options menu, but that's just awful. 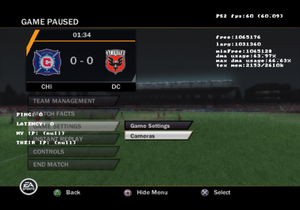 A few debug displays that shows the frame rate and memory usage. It also has a different Online debug display that can only be drawn if the FPS/Memory display is active, but since this game has no online play, it's quite useless. The 1st code activates the FPS/memory usage and the 2nd one activates the Online display.