Fallout is a landmark post-apocalyptic RPG from Interplay, developed by a team that included the founding members of Troika Games and the group that would later be known as Black Isle Studios. It was initially conceived as an electronic adaptation of the GURPS role-playing system in an original setting (and there are indeed a few traces of GURPS to be found in the demo), but the GURPS license was pulled in a legal dispute initially started over extreme 256-color violence. Instead, it uses the series' signature SPECIAL system. Fallout is remembered as one of the greatest CRPGs of all time and its genre influence is arguably unrivaled by any game without 'Ultima' in its title. It spawned four sequels and two spin-offs of varying quality, all of which were developed by different teams from one another.

The information on this page can be accessed first-hand using dedicated mod tools.

Run the attached patching tool on falloutw.exe. Add the following lines to the config file:

Then, using the command prompt, typing in set DEBUGACTIVE=LOG before running falloutw.exe will log to a file. Alternatively, set DEBUGACTIVE=GNW will show the log information in real-time while playing the game.

A non-functional unused item, featuring a graphic that was later recycled in the sequel for use by an unrelated quest item (Explosive Switch). Weight: 1, value 0. Description:

Semi-official commentary from Fallout Bible 8 by developer Tim Cain, regarding this item as well as Tangler's Hand:

"I am pretty sure that both of these items were part of deleted quests. Tangler's Hand was used to prove that you killed someone (duh, Tangler probably), and I think it was in Adytum, which was heavily modified near the end of FO's development. I am even less clear on the field switch, but I remember we had lots of discussion on how to handle the player bringing down the force fields in the Military Base, so it was probably going to be used for that, but then got tossed aside when another solution was used.

Mr. Taylor may remember these better than I.

This was confirmed by Chris Taylor.

A quest item for the cut Boneyard quest 'Deliver Locket for Romero', which would have been handed to the player by Romero. Weight: 1, value 400. Description:

The unused knife as seen in the manual.

A cut melee weapon which exists only as an unused inventory icon and not a functional item. The manual displays a similar looking implement called simply 'knife', so this is likely just an earlier version of the graphic rather than an incomplete weapon.

A novelty item later found in Fallout 2 which exists unused in the files for this game. Description:

A quest item once belonging to the anatomy of a man named Tangler, leader of a cut gang called the Rippers. The Rippers were one of two gangs only partially implemented before their hometown in the Boneyard was overhauled late in development and their territory repopulated by Deathclaws (this change is hinted at by the 'Ripper' movie poster on this map). Their leader's hand is the most significant remaining artifact of this quest and remains unused in both Fallout 1 & 2. Weight: 3, value 200. Description:

This doesn't have an inventory icon. Description:

All of these maps can be accessed with minimal effort thanks to the presence of a recording mode which the developers likely forgot to remove. Pressing Ctrl+R on the title screen will open up a full map list to record a demo to play on the title screen. Recordings will be saved in the "DATA/selfrun" directory. You can select any map in the game (and a few which aren't) and explore as Max Stone. NPCs will not fight or speak to you (unless you trigger a script), although you can drop plastic explosives on them or kill them by pumping them full of Super Stimpaks. You cannot interact with the environment while in this mode except to open doors. Pressing Ctrl+R again ends the recording. Exit grids will not function in this mode but you can save then load while playing normally to use them. 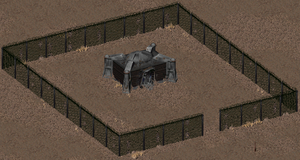 At some point, the Brotherhood of Steel bunker was supposed to be invaded by Super Mutants. The unpatched game had mutant invasions occur in certain areas after a significant amount of time passed, but the BOS bunker was not one of those places. Exiting the map leaves you in Vault 13's world map square.

A Junktown-like map designed for (and fully explorable in) the demo. All the demo's NPCs are still standing around though you can't talk to them. Called Error on the loading screen. Cannot be exited as there is no exit grid.

An utterly empty dirt field used as a canvas by mapmakers. Called Error on the loading screen. 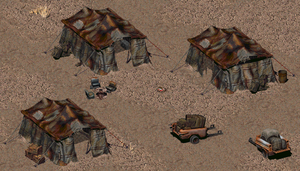 A mostly empty camp for a cut tribe of raiders. There is an empty ice chest in the tent on the left and a footlocker in the tent to the north. Exiting brings you to Vault 13's map screen. The Vipers themselves wouldn't make an appearance in the series until Fallout: New Vegas.

The animation children and midgets display as they burn to death is unused in Fallout. It was later used properly in Fallout 2.

These were all used in the demo.

Some of these graphics are normally meant for 'Mapper2', which Interplay used to create maps for both Fallout games.

These are used, but overwritten by other graphics making them impossible to see.

Savegame screenshot from the entrance to Vault 13 as part of the save/load screen background. Empty save games use a blank background without a screenshot.

Early graphic of the held item panel loaded into the interface under the used version of the same graphic.

In the HP/AC numeral part of this same graphic (not pictured), the overwritten digits are 036 HP and -258 AC. Similarly the graphics for age, skill %, timers, and special points are all 23 for 2 digit values and 223 for 3 digits before being overwritten by their actual values.

Found in PIPBOY.MSG. These are all located in the L.A. Boneyard, a location that was heavily re-worked late in the development cycle. Much more evidence for scrapped quests can be found in cut dialog files.

These are the words censored by turning the language filter on in the options menu, contained in BADWORDS.TXT (requires f1undat to decompress). Some of these words are unused in the final script e.g. 'pigfucker'.

This is part of the Super Mutant invasion event that is referenced in several endings but never actually occurs in the game. 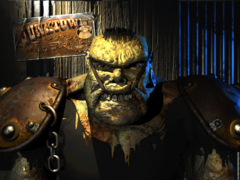 Followers of the Apocalypse

This ending is inaccessible because the criteria calls for two actions that are impossible due to missing NPCs. 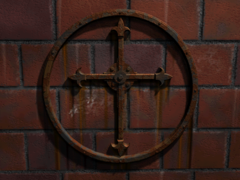 The traitor doesn't actually exist, and is only mentioned in some unused lines in Vree's dialog file.

European versions of Fallout were censored to varying degrees dependent on region. Patches exist to re-implement this content for European players.

NOTE: This is the version that GOG.com supplies!

On November 9, 1999, a v1.1 US patch was released to fix a few errors that existed in the original game: