Fallout 3 is 2008's award-winning post-apocalyptic corpse-lootin' dungeon crawler. It is the first Fallout game to move away from the Diablo-like style, and went into full 3D and gave the option for first-person view. The game's dedicated mod kit (G.E.C.K.) can be used to easily view much of this unimplemented content.

Unused stage of the main quest between "The American Dream" and "Take It Back!". This was presumably the original explanation for how Liberty Prime's power issues were resolved. Several Citadel terminal entries refer to an Accelerated Vector Fusion module that Liberty Prime needs to function and one entry says that Doctor Li had been working on the technology in her lab in Rviet City. Likely this is the MacGuffin the player would have been tasked with retrieving in Infiltration. In retail the player can ask Doctor Li about her lab; she responds with "Our work on portable fusion power and hydroponics are coming along quite nicely, if not quite according to schedule. This is despite the fact the laboratory is entirely devoted to hydroponics and there's evidently no sign of any fusion power research. Curiously, concept art for Rivet City does depict what looks like a large spherical reactor.

During development, there was also a quest in which the Enclave would attack Rivet City, and the player character would be tasked with escorting the inhabitants to the Citadel (see: Prerelease:Fallout 3). However, team lead Todd Howard decided it was just too big. It's plausible the quest was named Infiltration because the player would be sneaking past Enclave forces occupying the city.

Relevant terminal entries in the Citadel:

Unused stage of the main quest set after "Take It Back!". It has no objectives remaining in code. Most likely it is the basis of the Broken Steel DLC.

Unused stages of the optional quest, where the player would print something at Hubris Comics, but not required for the quest.

Lea appears to be a previous name for Moria Brown, as can be identified by Script notes for her dialogue lines.

Name unknown, from cut dialogue topics it can be interpreted that the quest's premise was teaming up with Sarah Lyons and the Brotherhood Outcasts to recover an unusual artifact in an effort to unify the two Brotherhood of Steel factions. The Fort Independence laboratory still has an NPC marker for MS07 linked to two AI packages for a cut NPC named Specialist Aberdeen* (Specialist is the Outcast equivalent of a Brotherhood Scribe). Likely the artifact would have been brought to Fort Independence for study. Potential outcomes included the Outcasts and Elder Lyons' Brotherhood reuniting or a betrayal. There would have been a Galaxy News Radio report on the player's exploits once the quest was completed. The Outcasts have a fairly minimal role in retail Fallout 3 and this quest would have given the faction and their conflict with the Brotherhood a lot more depth. The player could have been rewarded with some sort of training from the Outcasts, and the player also had the option to take the item for themselves. There was also the potential of the player getting the item beforehand. It seems the "artifact" and the "item" were distinct from each other.

It's plausible the quest would have revolved around recovering technology of alien origin:

"In their eyes, they are the true Brotherhood of Steel, carrying on the mission of the main West Coast contingent. They proudly wear the name "Outcast"; anything to further dissociation them from Lyons. It's also important to note that the Brotherhood's concentration on acquiring advanced technology means they have their obsessions—including the procurement of alien weapons from anywhere in the Capital Wasteland, including possible crashed U.F.O. and pre-war government installations."

Speculating, it seems unlikely the player would be incentivised to betray the quest givers to keep... a data(?) disk for themselves. The themes of alien technology, and the presence of alien power cells in Fort Independence and the Official Game Guide note on "alien weapons" suggests the alien blaster might have been at the center of the quest. This would present a dilemma to the player of having to forgo a powerful unique weapon for the greater good of reconciling the two Brotherhood factions. The scenario could have been the player is granted access to the Citadel archive terminal by the Brotherhood after meeting with the Outcasts, finds the secret pre-War laboratory where extraterrestial technology was researched, retrieves the alien data disk for analysis in Fort Independence, and from there gets the location of the downed UFO with alien blaster.

Specialist Aberdeen has left no other traces except for AI packages; one more lab marker not tied explicitly to MS07 and packages for eating, sleeping, and using the bathroom (!) in the upper level of Fort Independence. Interestingly even though research personnel are mentioned in terminal entries in the Fort Independence lab no Outcast Specialists were actually encountered in retail Fallout 3 until Operation: Anchorage was released.

The Outcasts introduction sequence is a leftover from MS07; the teleport marker that Protector Casdin uses to appear after the raider assault is repelled when the player first visits Fort Independence has the "MS07" prefix and as does dialogue from the named Outcasts present. There's also an unused marker named MS07IndependenceEntryMarker on the road approaching Ford Independence.

In the Citadel archives, there's a copy of the MS07 linked terminal in what looks like a messy attempt by Bethesda to scrub any unused MS07 leftovers from the game. Both use the same base terminal, both are enabled in-game and occupy the same coordinates but the copy is much newer. Looking at the three entries shared by both terminals (UFO report, molerat research, brainwashing) the UFO note has a different name format (CitPalandineNote versus CitadelArchiveMissionNOTE, CitadelArchiveBrainstormNOTE) and was created immediately after the duplicate terminal (B75F6 and B75F7) while the other two entries are older (7E17A and 7E17B), created not long after the original MS07 terminal (777AB). So in summary, after Bethesda cut MS07 they went out of their way to change the entry on a crashed UFO. What the entry originally said can only be guessed. Maybe a report on the recovery of alien technology and where it was taken to?

Several conversations that made their way to retail about the Brotherhood-Outcasts split are remnants of MS07, for example Elder Lyons and Protector Casdin's dialogue on the subject. Scribe Bowditch in the Citadel has dialogue linked to MS07 that could have been the starting point for the quest:

There's a generic Galaxy News Radio report that raises the question of Brotherhood-Outcasts reconciliation. Other GNR segments of this type present a conflict/dilemma as a prelude to a quest. It seems likely this report was tied to MS07:

This segment has an additional bit of scripting that ensures it never plays.

An interview[1] with Bethesda developer Jeff Gardiner in the run-up to the release of the Mothership Zeta DLC might (indirectly) give some insight into what motivated Bethesda to tie a giant alien conspiracy to such a crucial quest:

"We thought it would be a very unique environment to explore, a far cry from the dust ravaged wastes of DC. The lead designer, Emil Pagliarulo, and I are interested in Alien conspiracy theory... There's a lot of information to sift through on the internet, while neither of us is quite sure what to believe it makes for interesting coffee conversation."

The Prima Official Game Guide insists a second Alien Blaster (with "deceased Alien Captive") can be found in the Fort Bannister impact crater, under the overturned army truck. In retail there are only Alien Power Cells at this location. It could be an oversight, but the info persisted through several editions of the Guide and was even referenced in the Aliens faction profile from the Game of the Year Edition. There are other examples of cut or changed content finding its way into the Game Guide e.g. makeshift gas masks at Vault 106.

Some Fallout 3 concept art depicts the exploitation of stranded aliens by human scientists: 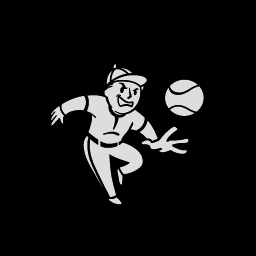 Throwing's Pip-Boy image, found with the other skill icons.

Throwing is a skill from Fallout 1 and 2, which in 3 was consolidated into the Explosives skill to simplify gameplay. There are Pip-Boy images in the game's texture file which reveal that it was planned to return at some point before ultimately being cut.

The image intended for use as its skill icon was later used in Fallout: New Vegas for the Heave Ho! perk.

The cut skill's description is still present in the game files:

In a curious coincidence Bethesda used the GURPS tabletop role-playing game system to prototype Fallout 3 during early development. There's an old script for handling minor quests called FreeFormDCQuestSCRIPT with the following note at the start:

Maybe there were at one time skill checks beside speech like the classic Fallout titles? The references to critical failure and critical successes are intriguing too. 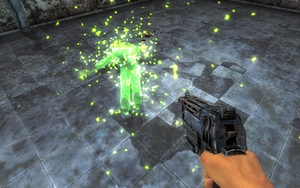 Atomization - The victim is engulfed in a green particle effect... 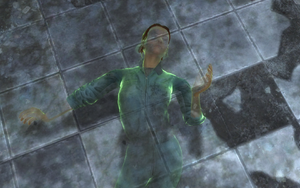 ...and their corpse is rendered transparent with a mild radioactive glow. This might be due to a missing texture.

These are bestowed on actors (including players), mostly through perks.

There are also unused effects for all the bobbleheads, which do the same thing as the items' scripts.

Some of these unused effects show different item bonuses than what is actually used in the game. From the GECK Wiki, "A Base Effect is a fundamental "magic effect" in Fallout 3 that defines a particular way of modifying the player's stats or starting a script whenever the player consumes an Ingestible (food item, drug, or chemical) or is affected by an Actor Effect ("ability") or Object Effect ("enchantment")." 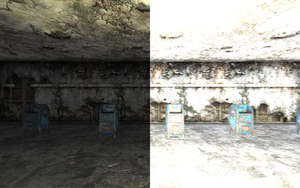 These serve as "enchantments" endowed on the player through equipment.

Originally, during the confrontation with the Enclave during 'The Waters of Life', instead of Colonel Autumn being locked in with Dad as soon as the player returns to the Jefferson Rotunda, they would witness a scene in which Dad tries to get Li out of the Purifier's Main Chamber, and consequently saves her life.

Simply some placeholder lines of dialogue for Liberty Prime.

The Japanese version had some cuts to avoid getting banned: