This is a sub-page of Fallout 3.

All NPCs that still exist in NPC form can be placed in-game by entering the command player.placeatme in the console, followed by the specific NPC's provided form ID.

Form ID: 00095501 Christine Kendall as she would've appeared during "Growing Up Fast" at your birthday party. In the final game, the earliest you encounter her, is during the quest "Future Imperfect". In this unused form she would've worn a standard children's vault suit, as well as a kid's party hat. She lacks the standard Pip-Boy and glove.

An early version of the friendly Glowing One in the Underworld's Chop Shop.

An unused Andale resident that has some scripting to interact with the other residents of Andale, but not the player. Wears dirty pre-War casualwear and is related to another unused NPC, Tuck Johnson.

A man with nothing on him but his set of Metal Armor. The only internal reference to him is a line of dialog associated with the quest "The Replicated Man". 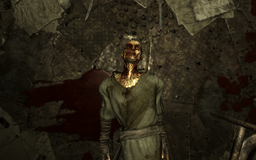 Form ID: 17C2F An early placeholder for Davis West, who appears in-game as a rotten corpse.

Form ID: 300A3 An early version of the friendly Glowing One in the Underworld's Chop Shop.

Form ID: 2E032 A Brotherhood of Steel paladin with some unique dialog lines. His internal name, "FFDCChesterbrookBoS02" places him in Chesterbrook, PA. It also reveals that there were meant to be other Brotherhood members here, although almost all trace of them has been removed from the files. The internal naming for his dialog indicates that he was either originally called "Paladin Bishop", or that he was given Bishop's dialog. No other reference of Bishop exists.

Form ID: A1212 A scientist from Vault 92. He does not appear in the flesh in-game, but this unseen NPC is tied to some notes and audio logs related to the quest "Agatha's Song". 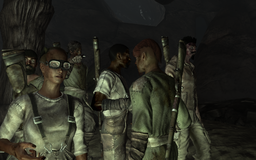 A group of elusive Rock Crick Hunters in their natural habitat.

Form ID: 32EB8 A test NPC, only meant to lie down on a mattress in one of the test maps, testqaitems.

An unused Little Lamplighter. She has a plethora of unique lines, and wears a junior officer outfit with a kid's baseball cap.

Form ID: 000309B0 Stevie Mack as he would've appeared during "Growing Up Fast" at your birthday party. In the final game, the earliest you encounter him is during the quest "Escape!". In this unused form he would've worn a standard vault suit, as well as the standard Pip-Boy and glove.

Form ID: 0009550A Susie Mack as she would've appeared during "Growing Up Fast" at your birthday party. In the final game, the earliest you encounter her, is during the quest "Future Imperfect". In this unused form she would've worn a standard children's vault suit, the standard Pip-Boy and glove, as well as a kid's party hat.

Form ID: 25A90 A man wearing a brahmin-skin outfit and a ballcap with glasses. He would've originally gave the player a clue during the quest "The Replicated Man", as revealed by a script from that quest.

An unused Andale resident that has some scripting to interact with the other residents of Andale, but not the player. Wears pre-War casualwear and is related to another unused NPC, Karen Johnson.

There are textures for a Brotherhood of Steel Robobrain in the game's files, but there are no matching robots in the GECK, unused or otherwise.

Form ID: 1CF74 There are models and a GECK entry for an Enclave Robobrain, but no corresponding textures.

Doc, the dog that the player character's father takes the form of in Tranquility Lane, has a unique skin which was likely cut because of the simulation's grayscale color scheme. Still, it would have been useful as a unique skin for Dogmeat or an alternative for the generic wasteland pups.

It seems that at one point the Eyebot was considered a generic robot like the Protectron, et. al, as opposed to an Enclave-specific model. There are textures for an Outcast variant (but no model or unused GECK creature) and textureless models for U.S. Army, Brotherhood, and Enclave versions (the model used in-game is the generic version, not Enclave). None of these creatures can be summoned in-game without modding.

Looking through the game's meshes, it appears that the Brotherhood and Enclave were to have their own uniquely-skinned Sentry Bots at one point in development. However, the only unique Sentry Bot skins used in the game are U.S. Army and Outcast. Enclave Sentry Bots use the generic steel skin.

There are several unused model attachments for the Protectron.

Unrelated to the above, there are untextured models for Enclave and Brotherhood Protectrons, and an unused GECK entry for the Enclave version. Like the Mister Gutsys, Enclave Protectrons would later be added to Broken Steel. Enclave Protectron: 1CF8B