All three Famicom games (the other two being Satomi Hakkenden and Sted: Iseki Wakusei no Yabou) developed by Alpha Denshi contain the same debug routines to test game internals or engines. This particular game contains all of them at the same time. 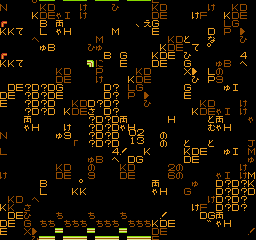 All revisions of this game contain scrolling engine test routines. Since this is just leftovers from software library, there are no actual background data or CHR bank setups, but the engine itself is working. Use the Game Genie code GEOKYAAX, then reset the console. Now you can scroll background garbage in any direction by pressing on the D-Pad on the first controller, and with the A or B buttons you can play the test sounds. On the second controller press the A button to print the string "TEST0123456789TEST" to the background. There are two sprites at the center of the screen too; using the D-Pad of the second controller, you can move one of them around the other one. 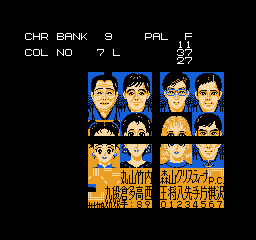 Only the REV0 version contains this mode. Use the Game Genie code AANGIAAE, then reset the console. Now you can see the game's graphics, and select any palette or edit any of the existing palettes with the D-Pad and the A button on the first controller. Since these are just leftovers, changing some of the values causes the program to crash. 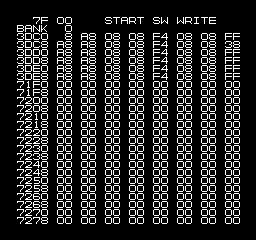 Only the REV0 version contains this mode. Use the Game Genie code GANGIAAA, then reset the console. Now you can browse CPU memory as well as modify any data in it.