Famicom Tantei Club Part II: Ushiro ni Tatsu Shoujo (the subtitle translating to "The Girl Who Stands Behind") is the Super Famicom remake of the second in a series of murder mystery games originally released on Famicom Disk System. The SFC/SNES version features significantly upgraded graphics, music, and so on. A English fan translation patch by Demiforce has been around for a while, with the game finally receiving an official localization for its re-remake on Switch in 2021. 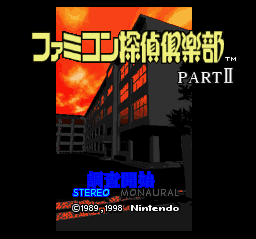 Setting 7E08FD to 01 on the title screen will enable a sound option.

Pressing Left or Right will display the option and switch between Stereo and Monaural. This is accompanied by a sound effect and the sound mode actually switching (!).

This text is in English even in the original un-translated ROM.

The position of the sprite that appears (underneath the "New Game/Continue" options) seems to suggest that those two options were supposed to appear higher than they do in the final ROM. 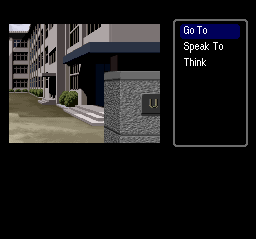 There is a debug menu available for testing location backgrounds and character graphics. To access it, use the Pro Action Replay (PAR) codes:

With the codes active, "Go To" any available location, then disable the codes. 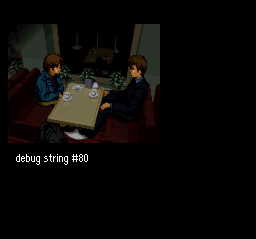 Selecting "Go To" on the debug menu allows you to cycle through all of the scenes associated with any location in the game. Each scene displays a differently numbered generic debug string. These strings may have contained more useful information (such as specific details about a scene) at some point during development. 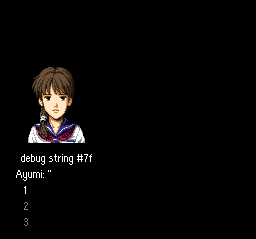 Selecting "City" from the "Go To" menu brings up this menu, which allows you to test various animations. Each of the three choices leads to other menus with 3 choices. Each of these choices displays various cinematic sequences, with similar generic debug strings in place of the text/dialogue that is usually shown. 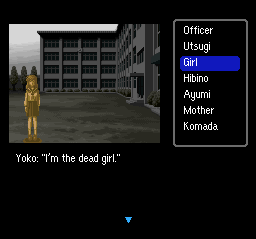 Selecting "Speak To" lets you cycle through all of the expression and pose graphics for all of the characters in the game. Each character repeatedly says a short greeting as you view each individual graphic. 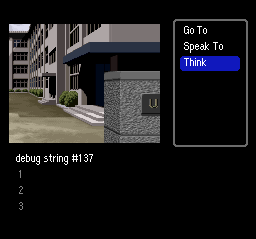 Selecting "Think" brings up this menu. The first option shows the chapter 11 intro, the second takes you to the ending and staff roll, and the third does the same thing as selecting "Man" from the Speak To menu (this may have originally done something else; see below.)

Some additional debug-related text is located in the ROM.

This message from the staff may have originally been displayed by the third "Think" option in the debug menu. Since the staff roll is obviously no longer under construction in the final game, the message may have been deemed unnecessary and taken out.

These strings describing various poses and facial expressions were probably used by the "Speak To" debug option at some point, rather than the character-specific greetings.

The ROM seems to hint the Nintendo mouse was supported at one time.

The following text is located at 0x16EC in the ROM: