Fighter's History is a fighting game by Data East which warranted an unsuccessful lawsuit from another company, claiming it was too similar to one of their games, that one with the Russian wrestler and the guy in a karate suit who throws fireballs. 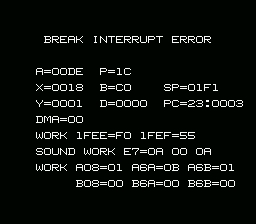 A basic error handler is included in the game. This displays information on the SNES's registers and RAM so that programmers can track down what made the game crash.

An easy way to access this screen is to use the Pro Action Replay (PAR) code 7E0A000C in VS Mode, then use any attack with the glitched up mess of a character that appears.

In these images taken from the 'Congratulations' screen, Feilin's chest-plate and Jean's leg-band are actually secondary-layer graphics with some unused ones underneath.

An error message (different from the standard regional error messages) appears at 0x004981. It's unknown what triggers it, if anything. Having a Super Scope / Multitap doesn't bring it up. 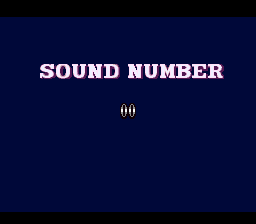 then choose any option in the main menu.