It's just like Street Fighter, only with less streets!

The game contains an unused NTDEC logo with the ending graphics. 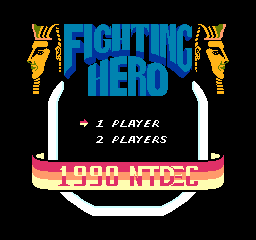 The developers actually ported over the main character's special moves, however these are locked behind a cheat. To access these, hold A + B + Left + Up on the title screen and then B + Left + Down on the stage select screen. This will unlock the following commands:

Note that getting a game over will result in the special attacks being disabled again. This also means that they cannot be activated in 2 player mode.

Three different versions of this game exist. The original version mistakenly refers to the developer as "Maga Soft" in the title screen and credits, a typo which was fixed in the other versions. The third version improves the controls by having them do actions as soon as the button is pressed instead of when it's unpressed, but this version either removes or alters the method used to access the cheat mode.