Final Fantasy I & II: Dawn of Souls is a Game Boy Advance compilation/remake of the titular games' WonderSwan Color remakes, albeit with significant changes: Final Fantasy now has a standard MP system and plenty of new items, while Final Fantasy II has seen refinement to its leveling system, allowing characters' stats to progress much quicker.

Both games also have new dungeons, with Final Fantasy II receiving a dungeon that is actually played with characters who die over the course of the normal game...including one who wasn't even playable previously. 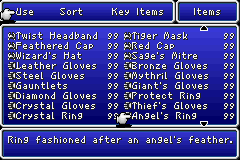 The Angel's Ring is arm gear that provides +8 defense, -1 evasion, +1 weight, and recovers a small amount of HP each round. It can be equipped by all of the mage/wizard classes. It was intended to be found in the 10th chest on the 33rd floor of Whisperwind Cove, but since the only map with ten chests will never appear on this floor, it is unobtainable. 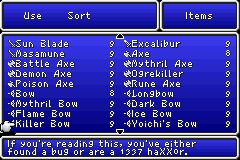 The Killer Bow from the original Famicom version is still present, although it now uses the unarmed animation when attacking with it. It also has a rather amusing description: "If you're reading this, you've either found a bug or are a 1337 haXX0r."

The Japanese version is simply titled Final Fantasy I•II Advance. The Dawn of Souls subtitle in other regions is a reference to "Soul of Chaos" and "Soul of Rebirth", the names given to the bonus content in these versions of the games. The artwork from each game's logo was added to the background and "Published by Nintendo" was added to the title screen; Square Enix's copyright was pushed up to make room for it.

The Monster's Collection was renamed to simply "Bestiary" for the international releases. 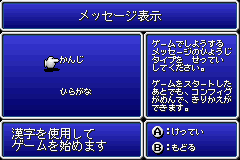 The Japanese version displays this menu after starting a new game, which allows you to choose whether or not to have kanji in the script. 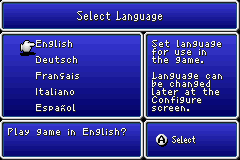 A similar menu is shown upon starting the European version for the first time, allowing you to select which of the five supported languages you want to play the game in. The English script was actually updated for this version, mostly to change American spelling to British, but some other changes were also made, such as Garland's infamous "knock you all down" quote, which was changed to "cut you down to size".

In either version, this option can later be changed in the config menu. Since the US version lacks this option, the other options in the config menu have been padded out to better fill in the empty space. The European version also updates the deceptively-named "B Button Dash" option to "Run Mode", since the option toggles whether or not to always run, and has nothing to do with the B button dash ability.

The Japanese Final Fantasy still limits names to four characters. This was bumped up to six in the other versions.

The European version adds a thinner font which is typically used in windows without much space. This is to accommodate the languages with longer text strings. Thankfully, unlike later Final Fantasy Advance titles, the wider font is still used in most places.

For the same reason, the layout of many of the horizontal menus has been changed. Instead of having three options in a row, the third option is now placed below the second option. The latter layout would go on to become the standard for future Advance ports.