This is a sub-page of Final Fantasy VIII.

Despite an extra disc, there's much less cut, hidden and different text of actual substance than in Final Fantasy VII. To make up for this, the US->UK localisation team went totally daft.

This text referring to an unused Triple Triad rule exists (albeit hidden) in every location where a card game is possible.

Generic leaving text for the Card Queen from every location she's at. It is never used, specific texts mentioning where she is going are preferred instead.

Almost every location in the game contains one of these two placeholders.

Outside the Train Station

The girl in love with Zell does remember his answers to her questionaire. This interjection goes unused as the Library Commitee Member just continues with her speech.

The lazy student further laments being the only one taking his upcoming test.

After telling you to go to Timber, Cid was to give you the opportunity to ask questions. It and their responses remain hidden though.

Grouped with Selphie's text after being shown the directory. Most likely this was her original ending line (given her sprite waves) before being replaced with "Thanks a lot!"

An unused conversation between two or three people.

Zell was to introduce himself after the FMV.

Rinoa's tour around the back of the garden was to have a little more dialog.

An extra bit of text before Quistis sidles into the game.

Cid's speech about NORG and the real purpose of Garden had an extra bit.

One of the White SeeDs showed some gratitude after saving Ellone. Instead, he just bows and leaves silently.

One of the two kids with the SeeD uttered this when they're cornered by the Garden Faculty during the fight for the garden.

Squall, compassionate? No wonder it was cut. Would have come after defeating the Garden Faculty's monster.

The scene going to the secret area is different in the JP version to other versions. International versions add this text and the interstitial Status junction tutorial.

This being removed was a casualty of the above change. It kicks off the conversation in the JP version.

Selphie shows off her SeeD uniform. Was replaced with "Tee-hee! So, what do you think?" in the game.

The used version of this text was slightly different, and wasn't displayed in the dorm.

Actioning the bed led to a more involved menu at one point.

Unused menu to change back into SeeD uniform.

Response to Zell asking if Squall 'wants to kick some monster butt at the training centre'.

Squall's rebuke of Quistis pouring her heart out was met with a puzzled silence before it was removed. 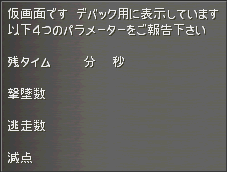 Grouped with the SeeD score dialog is this debugging aid text box.

A quick GF junction tutorial that occurs in the Japanese game. It was removed for the US & UK versions.

It's likely that in a previous incarnation, the time to complete the Fire Cavern kept counting down when leaving before defeating Ifrit. Upon re-entering the Garden faculty would've told you how long was left on the clock. In the final, the clock resets to the chosen time limit.

The Garden Faculty say this after exiting the Fire Cavern in the Japanese version. It goes unused in others.

Most likely a reminder for the devs.

Giving in to Selphie's girlish glee at going through the door.

An alternate end to the Deling City train ride. Selphie calls it Galbadia, and selecting "We should be there soon" option ends the ride.

Zell likes trains almost as much as Selphie does. Most likely dropped because the trains don't actually go all around the world, or to try and lessen Zell's insufferability.

Extreme fourth wall breakage. May be unused character speech but most likely a developer note.

Squall reacting to Irvine doubting his luck with the ladies.

The game gives you three rebukes to Zell's pestering, but this isn't one of his retorts. After the last knockback, Selphie interrupts the conversation. Zell doesn't get a chance to deliver the silent treatment.

In the Dollet mission, you presumably weren't to be allowed to run back to the beach. As you can, this stays hidden.

Unseen keycards unlock the different doors in the game, so they don't require a password at all.

Some card players have custom messages if you challenge them with an insuffient number of cards. The challenger here had theirs removed in favour of the standard "You need 5 or more cards to play."

This text and the subsequent party member switching tutorial aren't present in the Japanese version.

Reactions from the first dream sequence that don't see the light of day.

Proactionary text for the hotel busybody.

More development text from the Japanese version, it was replaced with a copy of the opening line of the scene ("Thanks for coming") in the international versions.

This text is used before the party switch tutorial at Galbadia Garden, but not before the Parade.

This comes directly after the above text. As he initially picks the party at that switch tutorial, this may have been his response when you shoot down his selection.

Dev text at the top of the podium, only present in the Japanese version.

Instead of Squall deciding the teams in the warmth of the mansion, the General wanted to do it outside on the walk to the gateway. That usurper!

An unused menu for buses. In the game, you just get on and off of your own accord rather than choose when you get on.

Outside the station, buses only go to the Presidential Residence and Caraway's Mansion so this stays hidden.

In an earlier version, you presumably had to buy the map of the Tomb of the Unknown King.

When you select to give the answer, the guard doesn't speak, likewise when you've finished entering he only says the number and not that whole sentence so these remains hidden.

All that's unused in the sewers is this, a development dialog containing the value of something.

Two labels for something or other.

Quistis readies the gatehouse team for the off.

Maybe Zell tried breaking the window glass in order to escape the mansion. Or maybe it was too obvious a clue to the escape route. Either way, it got canned.

The bus stop attendents use more specific versions, but never this generic message.

No Galbadian soldier is ever present on the fountain side of the gateway, so these bits of dialog are never seen.

Squall's thoughts on being caught and paraded on Galbadian TV are ignored by the masses.

More development text, this time from where the car is in the first dream sequence.

Copious bits of dialogue from the journalist wound up on the floor.

Likewise for the editor's extra expounding.

The receptionist also had a bit cut.

If you somehow don't have enough money to buy the drifter a drink, the bartender will give it to you. This isn't unused but is unlikely to ever be seen.

Full descriptions and/or menu choices for three of the six drinks the drifter describes.

The Japanese version doesn't have this reminder and automatic trip to the menu before fighting the fake president.

As well as other characters dialogue before confronting the 'president'.

These two pieces surround the Angelo limit break explanation. They aren't present in the Japanese version.

This exchange at the end of the demonstration is not hidden, but with it requiring you to sit through the entire sequence twice, it's as good as.

When entering the second bunch of codes, Zell and Selphie are otherwise disposed so they never get to say these.

Laguna tickles Ward before they jump off the cliff. The motion is silent in the game.

Labels for use by the developers or QA.