The mayor's daughter has been kidnapped! Go beat everyone up. 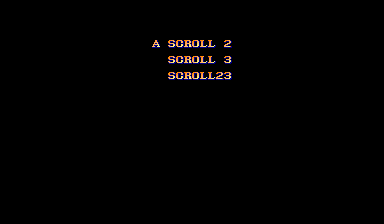 To access a simple layer viewer, set the game to Service Mode, hold 1P Attack then reset the game. "SCROLL 2" is the foreground layer, "SCROLL 3" is the background, and "SCROLL 23" combines the two. 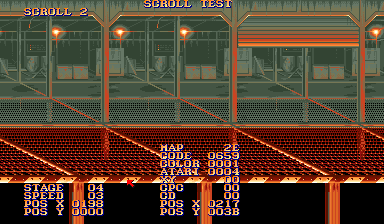 Initially, the screen will be blank. Press 1P Attack to select a stage and 1P Jump to load it. 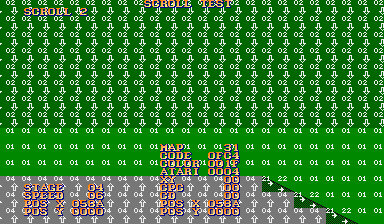 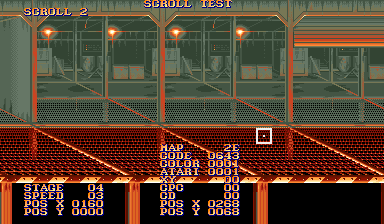 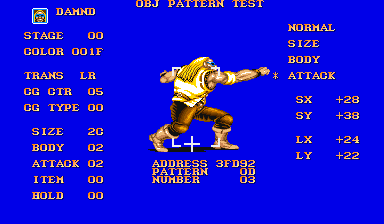 To access an object pattern test, set the game to Service Mode, hold 1P Jump then reset the game. 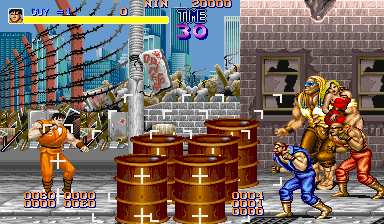 Put the following code in MAME's ffight.xml cheat file (Or any of the cloned sets' cheat files) to enable an in-game debug mode:

This is supposed to be enabled by starting the game in Game Mode, then setting the game mode to "Test", which would set RAM address FF8084 to 00, but that value is only set to 01 if the game actually enters the test mode.

By default, all this does is enable some stage and difficulty information on-screen:

Depending on the value of certain dip switches, more options are enabled:

An alternate design of the destructible billboards in Stage 3. Pretty obvious why this version wasn't used. Yikes.

Unique name graphics for the playable characters, presumably intended to be used on the attract mode bios or character select screen, which both simply spell out the names with the game's generic 16x16 font. Guy's name is misspelled because, as director Akira Nishitani puts it, "we weren't really aware of English spelling and pronunciation conventions."

Guy performing a standing kick, which he can't do in the actual game. This graphic was later used as a reference for Guy's medium kick in Street Fighter Alpha.

Guy apparently blocking (which no playable character can do) and doing another unknown pose.

An alternate version of the graphic used when Cody flips through the air during a jump.

This is found with the graphics used when Cody uses a weapon and was likely intended for the same purpose.

A tile marking where there's no graphics tile. Whoa man.

This is the last tile in memory and marks where the "Scroll 2" section ends.

The underground area in Round 1 has stairs on each side, which are never seen in the game. They have no collision data and are not present in any other Round of the game.

The following is loaded into memory, right after William S. Sessions' name:

As mentioned in a pre-release flyer of the game and some official Capcom books, Street Fighter '89 was the game's original title.

The setting of the game was changed from 1989 in the Japanese version (same year as the game's release) to the more ambiguous "Sometime in the 1990's" in the international version, likely done so to avoid dating the game too quickly (as Final Fight started its distribution to arcades in December 1989). Later console versions of the game would update the year to 1990 for the Japanese Super Famicom version and then to 1992 for Final Fight CD, before being changed back to 1989 for Final Fight One (embracing its period setting).

In the Japanese game's intro, Jessica appears on the T.V. screen for an instant before Damnd does. However, in the US and World versions, Jessica is never shown. Damnd's face is always on the monitor, but you can hear Jessica screaming in the background. Who knows why they thought changing this would make the game seem more family-friendly. This graphic of Jessica was later used on some ports of the game, with some versions (like the SNES port) having her attire changed from white underwear to a red dress to make it less sexually suggestive.

The profiles of the three playable characters show more details about them on the Japanese version, such as the ages of each (being consistent with the 1989 setting), their height and weight using the metric system (this information is given on the character select with "ft" and lbs" instead) and their favorite foods (salmon tea rice and cold tofu for Guy, spinach and milk for Cody, and burgers and curry rice for Haggar). International versions just give the birth date and the description. Cody's Japanese bio also describes him as "the protagonist of this game", which is omitted in the English bio.

If you finish the game without continuing, you'll get treated to an Omake ending after the credits are over. In the Japanese version you get two paragraphs by Pom and Akiman, and then short sentences by several other staff members (in the Kansai-ben dialect). In the international versions, the paragraphs were replaced by a message saying "MY NAME IS POM" and the short sentences changed to a generic "My name is...". Some of the portrait icons accompanying the sentences were also changed in the international versions.

"You did it! Darn, I still can't stop shaking!"

"It's great you made it this far! Try and do it again!"

"I cried buckets of tears at your battles 'cuz I was so moved."

"You did it, how dare you make it all the way here! I want to see your next fight!"

"I have my face in here for helping. Gratze! Gratze!"

"What do you think of the 7th CPS game? I want to be at the next one too!"

"We are the PomG that donned a disguise called Final Fight."

"It's over. There's probably nothing else. But there's a new game drawing near..."

"Best regards to Capcom and Alph from here on out! -- From the whole team."

"CAPCOM makes games where you kill things. Everyone, go out and kill, kill, KILL!"