Final Fight One is a Game Boy Advance port of the arcade hit, which can be better described as what the SNES version would have been if it wasn't missing so many things. 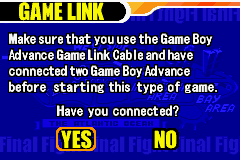 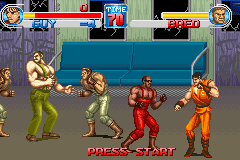 The demo recorder seen in the SNES version is present here, too. When ROM address $094FFC (US version) is set to $80, the game starts up asking you to link GBAs, as each demo uses 2 players. Once you successfully link (both games must have the byte patched in order to work), you'll be brought to the Slums demo to begin fighting. Once it ends, the $80 record mode bit that was copied to RAM address $020237EC is reset, and bit $01 (playback mode) is set. Wait at the title screen to see your recorded gameplay. To play the Subway demo instead, you must also patch both games with $01 at ROM address $094FFD (US version).

When ROM address $094FFB (US version) is set to $01, hold Start and press Select to soft reset the game. This was one of the many features of the SNES version's debug mode. Sadly, it seems the rest didn't make it... 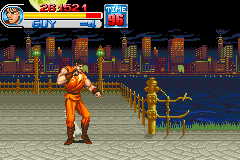 In the Bay Area stage, each of the barking dogs in the background gives a bonus. Stand underneath them, where your X coord overlaps the dog, and your Y coord is a step or so down from the top of the screen, as shown in the picture above. The bonuses are identical to those in Final Fight Guy:

The second bonus will play a sound effect each time a credit is successfully added, as there's no on-screen indicator.

These bonuses apparently went undiscovered all these years even though they were hinted at by Alpha Cody in the Bay Area boss fight against Abigail: 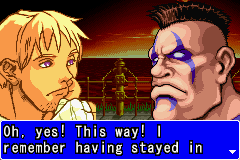 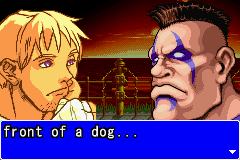 Just like the SNES version, entering specific names for the top 3 high scores will reward you with extra credits. Unfortunately, when the developers expanded the high score name entry from 3 letters to 6, they neglected to update some parts of the code that handles the bonuses, resulting in some odd name requirements and rendering one of the bonuses unobtainable (the code only steps through the "CAPCOMGUYYLM" comparison string by three characters each time it checks a name; in order for this to work properly, the string would need to be expanded to 24 characters, and stepped through by six characters for each name check). The disassembled and commented routine can be seen here. 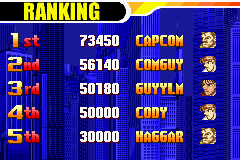 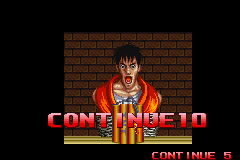 If the names for the top three scores are CAPCOM, COMGUY, and GUYYLM, in that order, you will start the next game with 5 credits instead of 3.

This bonus exists, but is not obtainable due to the bugged name check code. The code checks for CAPCOM, COMGUY, and YLM???, where "???" is the three bytes stored immediately after the name check string; since these bytes are not valid characters, the check never passes. 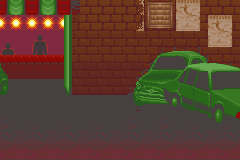 A layering mistake seen in the Japanese and USA SNES versions was reintroduced and affects all regions of Final Fight One. This time, all 4 NPCs are missing, but they can be seen by viewing the BG2 layer in a GBA debugging emulator. The European SNES version, which had everything correct, looks like this: 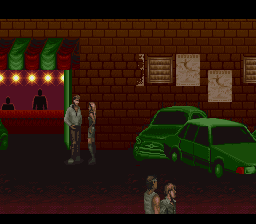 Blocks of text were copied directly from the SNES version, but not all of the strings in them are used because of the redesigned menus. This includes text from the old title screen, character select, options mode, and high score initials entry.

The colors of the title screens vary with each version of the game. Also note the additional katakana used on the Japanese screen.

The Japanese version's intro plays back the theme from the original and SNES versions of the game (Track 11 in the sound test), then after Haggar finishes talking to Damnd, it starts playing another tune (Track 04 in the sound test.) But in the US and European versions, the original intro is never played - track 04 is the only theme used.

Many (but not all) of the international changes in the SNES versions were also done in this version: