Fire Emblem: Monshou no Nazo is a part-remake, part-sequel follow-up to the original Famicom game. It's divided into two parts: the first is a slightly shortened remake of the first game, and the second tells the brand-new story of how a collapsing marriage nearly brought about the dragon apocalypse.

The second part was later given a stand-alone remake as Shin Monshou no Nazo for the Nintendo DS, which ended up also being a Japan exclusive.

A total of five chapters and six playable characters from the first game were cut from its Monshou remake, but some data remains for both the missing playable characters and the bosses and enemies of the cut chapters, mostly in the form of unit IDs and matching name strings.

The dark knight (ダークナイト; ID 21) is a variant of the cavalier class. It has a unique set of map sprites and it shares its battle sprites with the cavalier. It still wields lances, but unlike the cavalier it is unable to dismount.

Both Tear Ring Saga and Fire Emblem Awakening revisited the dark knight class idea. The Tear Ring Saga class has a very similar look and function to the Monshou class, while the Awakening one is a mounted magic/sword class.

The guardian (ID 25) is a variant of the general class. It has a unique set of map sprites, and shares its battle sprites with the general aside from its unique silver palette. It isn't programmed to use any weapons at all in regular gameplay, but the debug mode treats it as able to wield lances.

Unusually, the guardian has two completely different names depending on where one looks. The game has a separate list of class names used on the battle screen, which is usually used to abbreviate the longer classes to make them fit, but it spells "guardian" completely differently. Menus refer to it as "ガーディアン", a.k.a. the English word "guardian" spelled in katakana, but battle screens call it "しゅごしん", or "guardian god".

The ocean dragon (かいりゅう; ID 27) is a water-based dragon species, a concept which had originally been planned for Ankoku Ryu to Hikari no Tsurugi. It is able to move freely on water in the same way as the pirate class. It has a set of unique sprites for moving and attacking on the map, including a very distinctive dodging animation where it ducks underwater; although its stationary map animation no longer seems to exist, one frame of it still appears in unit list menus. In battle scenes, it just reuses the fire dragon's sprites.

It doesn't have a matching breath weapon of its own, but has no problems using the other four breaths if they are hacked into its inventory. Like the other dragon classes, when battle scenes are in map animation mode, it always uses a specific set of breath attack frames exclusive to itself that depict a waterspout, regardless of what breath weapon it is actually using. Appropriately, the Ankoku Ryuu concept also describes ocean dragons as attacking with waterspouts.

The debug menu indicates that a matching dragonstone item was also intended for it at one point, but its slot was eventually repurposed into the Part 2 version of the Aum staff.

Shadows of Valentia later introduced the dagons, a similar class of water-based dragons which also happen to reuse some assets from that game's fire dragons.

There is what appears to be a battle quote meant for Midia in Part 2. It is possible that she was initially intended to remain loyal to Hardin despite his corruption, but in the finished game, she is captured by Hardin for trying to lead a rebellion. 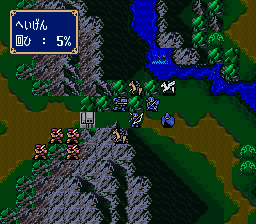 Chapter ID 00 contains a leftover test map titled "第９９章 デバッグがんばれ！のまき" (Ch.99 Good luck debugging! Nomaki). The map itself is a near-exact duplicate of the Part 2 Final-1 map. According to the status screen, the chapter's objective is to "Find all of the bugs" (バグをかんぜんにとる).

Set the byte at 7E07DF to 00 to access this map. Note that any attempt to save the game in battle preparations will fail and just delete the save file entirely.

The player is allowed to deploy a maximum of 7 units, including Marth. Unlike the actual chapter, the player's army starts right in the middle of the map (pictured). There are 13 enemy units, all of whom are named "Galder Soldier" and all of whom have Marth's Part 1 portrait. None of them have particularly remarkable stats or items, aside from a female mage who has a Nosferatu tome.

The map has a handful of noticeable differences from the actual Part 2 Final-1:

There are at least two unused maps which, unlike the test map and used chapters, exist only as maps and have no associated chapter data - no name or objective of their own, no enemies, no ally spawn points. Additionally, any space that one would expect to have some sort of interactive terrain effect (e.g. doors to open, thrones to seize, healing effects) is non-functional, although some other terrain effects (e.g. requiring mounted units to dismount to enter) are functional.

These maps can be accessed by setting the byte at 7E07CE to the appropriate value for a given map at the main menu, then doing one of two things: 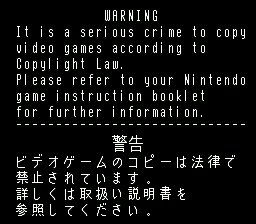 Like many post-1993 first-party SNES games, Monshou no Nazo tries to protect itself against being run on cartridge copiers by checking RAM at startup. The game calls a subroutine at $93EA4E that compares the memory range $700000-$702000 with the range $702000-$704000. If the cartridge has the correct amount of RAM, the ranges will be identical due to address mirroring and the game will pass the check subroutine, but an incorrect amount of RAM (as copiers commonly have by their very nature) will result in mismatched ranges that fail this check, prompting the game to throw up a stern warning message (featuring a fun typo) and freeze.