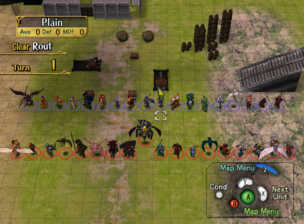 Enter the following Action Replay codes, then select Restart Chapter from the main menu, and hold down L while pressing A on any non-epilogue file. This will redirect the game to the test map. (A video can be seen right here.)

The map contains a preset collection of 18 playable units and 18 enemy units, all of whom have inventories full of powerful weapons and, for the enemies at least, are equipped with impossible skill combinations all well exceeding capacity. The enemies also generally have higher stats than the player units, especially Ashnard. Thankfully, their lack of AI means they won't move at all on enemy phase, so you won't have to worry about them while exploring the map.

A few points of interest among the units: 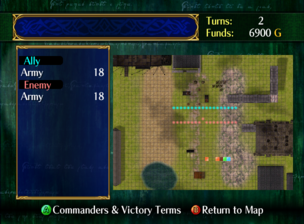 The map is one of the largest in the game, clocking in at 45 spaces across by 37 spaces down. It doesn't have a name or any objectives according to the conditions screen, although the map HUD disagrees and claims it's a rout chapter (routing it would be impossible due to the aforementioned enemy Elincia, though).

Around the area where all the units start, the terrain is divided up into several types: plains, desert, snow fields, thickets, floors, and swamps. The map itself doesn't actually look like it has these differences, but starting battles on these terrains will load the appropriate battle scene backgrounds.

There are a lot of objects scattered around the map - some are bits and pieces of scenery, including entire landmarks from specific maps, while others are common objectives and obstacles in need of testing. Going clockwise from the top-left corner, these objects include: